Planning on spending a weekend in York? It’s a good idea, as it’s a beautiful city with an interesting history, varied amount of things to do and plenty of cute and quirky places to stay. Read on for more ideas of how to spend an ideal weekend in York.

Living in the United Kingdom is tough. The temptation to travel abroad can be all too much at times and this is a real shame.

There’s so much to see, do and eat within the country’s borders… heck, you could spend a lifetime exploring England alone.

This guide will cover what you can do during a two day break to the picturesque city of York, in England’s north.

It’s a place that’s filled with plenty of history, good food and fun activities to get yourself into, making it the perfect city break from London and the other bigger cities of the UK.

How to Spend a Weekend in York

Read more: Spooky, Sustainable Fun: Champing in a Church in the UK

What to Do During a Weekend in York

Let’s start with a few things you can get up to during your time in the city. Fun fact – I’d planned to do almost all of these and encountered barriers at every turn. Missing the start of a ghost tour, pubs being too full (travesty), the River Ouse flooding.

I still had a marvellous time in York, which is a real testament to the city.

The Minster may be one of the most beautiful buildings in all of England, or at least I felt that way when I saw it. It should be at the top of your list of what to do during a weekend in York

It’s equally as interesting to view inside, as out. The outside is dotted with figures known as “grotesques” rather than gargoyles. So, rather than gremlin type creatures, you’ll see figures depicting a blind beggar, someone with leprosy and so on.

If you like stained glass windows, you wont be disappointed by the inside, which contains over 100 windows featuring historic images. Some of the more famous are the Pilgrimage Window and beautiful Great Rose Window.

Also, here I was thinking that a cathedral and minster were essentially the same thing. According to the internet, whose information should never be taken at face value, this is simply not the case. Minster is apparently a honorific title attributed to churches from the Anglo-saxon period.

Regardless, the York Minster dominates the cityscape and is a gorgeous piece of architecture. Be sure to check it out.

…And watch (or rather, listen to) the choir sing

Whilst you’re there, do your darnedest to witness the York Minster Choir sing. They have a history which dates back an incomprehensible amount of time and are said to be very, very good.

The Choir normally performs on Sundays at 10:00am, 11:30am and 4:00pm; on Tuesdays to Saturdays daily at 5:15pm. I spent a Tuesday in the city and tried to catch them, but typically they’d sung the day before and were taking a special break that day.

So, I had to sit through mass instead, which brought back traumatic memories from 13 years of Catholic schooling that I’ve spent my entire adult life trying to repress.

Read more: Things to Do in York on the Cheap

Walk the wall around the city

You can see the Roman influence across the UK, particularly in the presence of city walls, a form of defence from times gone past. Some are merely crumbling versions of their former selves, but York has one of the most intact walls within the country.

Yet, you can still walk them – if anything, you should as you’ll be rewarded with beautiful views of the city, for free. More information can be found here.

Book onto a walking tour of York here

Go on a ghost tour

A medieval town like York would certainly have some disgruntled spirits – in fact, the place is inundated with ghosts and is considered to be the most haunted city in England. Places of supernatural interest include the Minster, the Museum and the Brewery, among many others.

There are plenty of ghost tours on offer, which will take you around the city to learn of its unsettling history. Alternatively, you can attempt to go ghost watching via a comedy Ghost bus!

Book a spot on the York Ghost Bus here!

York has its share of historic pubs and one of the best known (and cutest – I have an interminable weakness for British pubs) is The House of Trembling Madness (or Delirium Tremens). People have been drinking on this site since 1180AD. That’s a mighty long time.

Grab a meal, grab a pint, but make sure you head there early before the after-work crowd descend upon it.

Or alternatively, make do with any pub in the city

If you can’t get into the DT, there are other venues to try your luck in, such as The Black Swan (another site that’s rumoured to be haunted), The Drawing Board or Pivni.

Read more: How to Spend a Weekend in Dorset

If you’re after a view of the city further afield from the walls, head out to Clifford’s Tower.

This tower is all that remains of York Castle and was raised by William the Conqueror. Adult entry costs £5.40.

If you’re into museums, or trains, or museums about trains, you’ve come to the right place.

British Rail has over 300 years of history and the National Railway Museum is the place to head if you want to learn more about the impact of trains on the UK over the last few centuries.

You can even take Afternoon Tea in a restored railway carriage. Well. I’m sold on the idea.

Read more: How to Spend Your First Week in London

After exploring the York Museum and trying to not bump into any (un)friendly ghosts, take a stroll around the adjoining gardens, set within the Medieval ruins of St. Mary’s Abbey.

If you time it right, i.e. go during the shoulder seasons and particularly spring, I can only imagine you will be delighted. Plus, there’ll be birds everywhere!

Take a day trip to the Yorkshire Dales or Moors

I can’t really blame you if you head to York only to leave immediately to explore the surrounding countryside, such as the Yorkshire Dales. Think stone built villages, rolling greens – basically England as you’ve always imagined it.

Book a place on a tour of the Yorkshire Dales

I also highly encourage making a trip to the Yorkshire Moors, which was actually the first part of England I ever stepped foot on! Well, if you don’t count Manchester Airport.

I actually read [easyazon_link identifier=”0141439556″ locale=”US” tag=”birdgehls10-20″]Wuthering Heights[/easyazon_link] in the moors itself and man, was it a trippy experience.

Book a place on a tour to the Yorkshire Moors

Firstly, I love how the above heading rhymes.

Secondly, you can’t go wrong with seeing a city from water. Or boats in general. A river cruise down the Ouse (I had to again, I’m not sorry) will provide you of a unique perspective of the city of York.

I know when I did a cruise on the River Thames in London, I learned stuff about the city I’d never known before, despite having lived there for almost two years at the time.

Book a cruise on the Ouse

Where to Stay during a Weekend in York

Check out other hotel options in York

Well, I hope that gives you a bit of an introductory idea of what’s on offer in this wonderful town. You can certainly squeeze a lot into a weekend in York.

However, if you’re after more ideas, here’s a detailed itinerary for Yorkshire. It’s a truly underrated corner of England.

Other posts on the United Kingdom

Some offbeat tours in London.
What NOT to do when visiting the United Kingdom.
Which should you travel to: Cambridge or Oxford?
How to Spend a weekend in Margate
Afternoon Tea in London, some honest reviews. 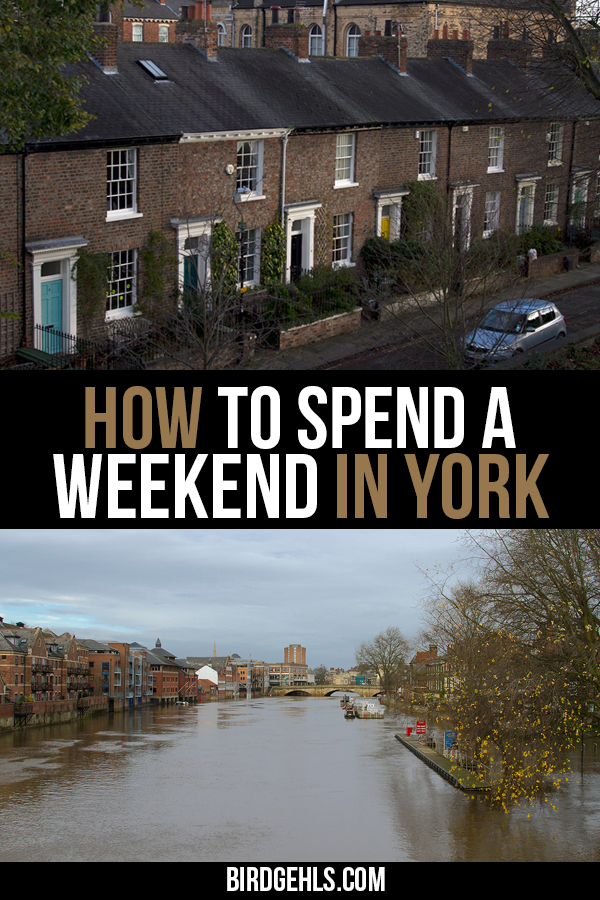 It’s pretty hard to move to or live in London and not be in awe of the Underground. Or feel consistently frustrated with it. After living in the city for over two years, I know I would bitch and moan when I have to wait more than five minutes for a train and do all…

Over the weekend I had the opportunity (read: forced my boyfriend to accompany me) to visit a small cul-de-sac in Kentish Town – “Little Green Street”. The street, which was immortalised by The Kinks in the music video of their 1966 hit Dead End Street had spiked my interest for a number of reasons and…

I made a decision during the first few hours of New Years Day – that being to make more of an effort to live more mindfully. It’s a super wanky word, yet so relevant at the same time. So yes, I’m going all Power of Now on you. What better way to do so than…

Want to get beyond the icons of London? Booking a place on one of these unusual London tours will make your trip to the UK capital memorable. The UK capital is the type of place where you would never be bored, but you could go broke, because there are so many fun things to do…

Summer finally decided to grace London with its presence in August. For almost three weeks we enjoyed on and off sunny days, paired with weather that could actually be described as “hot”. Somehow, the stars aligned and I had a day off from work, where I was in London and nothing written on my calendar….

What do you do when you finish work at an impossibly late hour on a ridiculously clear night? You stay up to watch a rare celestial event, of course. What exactly is the blood moon business that everyone is harping on about? It’s a lunar eclipse, combined with a ‘super moon’, which could be seen…