Why visit Japan? Well, there are plenty of reasons that spring to mind. The food. The culture. The people. The art. Did I mention the food? Here are a few reasons why you should consider booking a trip to Japan as soon as possible.

There are some countries that anyone who likes travelling should visit, at least once in their lifetime. Japan is surely one of them.

I will say straight off the bat that Japan was never a place I dreamed of visiting. I wanted to go – for sure! Yet, it wasn’t on say, my top ten list of places to travel to. My belief had been that I’d get there… some day.

This puts me in a unique position to write this post as when I did visit Japan, I was blown away. I love the country now and cannot wait to make a return trip.

So, why visit Japan? Well, it’s safe, clean, the public transport is amazing and the food will make your tastebuds explode with joy.

Here are some other reasons why I think travellers should make a point of planning a trip to Japan and particularly why it may be a good destination for first time travellers.

Read more: A Detailed Itinerary for Travel in Japan

Why Visit Japan? Here Are a Few Good Reasons!

This was my reigning thought when travelling in Japan.

There were quite a few moments where I wondered if the plane I had hoped onboard of was actually a time machine that had sent me hurtling into the future, where everything was clean and ordered, yet on the downside everyone I loved was dead.

I loved that you can go to restaurants and order off iPads (it seemed very new age in 2011) and that robots can greet you at hotels or make you coffee. That vending machines will pop out cans of hot chocolate that are piping hot and have a multi-purpose of keeping both your hands and belly warm on a freezing cold day.

And the trains. I heart Japanese trains so much.

2. Yet, it’s also a beautiful blending of old meets new

It is quite amazing that you can travel outside of the bigger cities of the country like Tokyo and Osaka and be hit with old-timey Japan.

That you can visit shrines and monuments which have been carefully preserved for centuries.

I treasured my time in Kyoto the most, as it was great fun to hop on a rental bike and spend a day riding from shrine to shrine, whilst not so quietly hoping to see women in traditional Japanese dress milling about.

From an outsider’s perspective, Japan is one country which seems intent on preserving its history, rather than destroying the old to make way for the new.

I think this is probably the most important thing about any country – your level of safety there, especially as a woman.

I have traditionally lived in large, dirty cities, where people seem to confuse the streets and buildings with their own personal canvas or rubbish bin.

My type A personality was overjoyed to stroll through cities that were so CLEAN and ORDERED. I think I saw one piece of graffiti the entire time I was in the country. ONE. Anywhere else and you would be presented with some immediately upon landing.

And although I travelled with a group of boys, I wouldn’t hesitate to return to Japan alone one day.

It was disheartening to get on a train on my return to Australia and see someone had scrawled “Wazza was here” on the back of a seat and left the remnants of a very unhealthy lunch scattered around the carriage.

It also poses an existential question – If a tree falls in a forest, does anyone hear it and if Wazza does not scrawl his name on the surface of public property, does he truly exist?

Now, let’s talk about the trains. Particularly the Shinkansen.

I flipping love the Shinkansen. I couldn’t believe that for roughly $300 AUD for a week, I could jump onto this super fast bullet train that took me all over the country.

It is comfortable and clean and isn’t full of people ignoring the quiet carriage signs and nattering away, which is one of my most stressful pet hates.

Plus everyone knows that time is the most valuable quality (or if you don’t you should). And the Shinkansen saves you so much time.

Take the distance from Tokyo to Japan. It’s roughly 450 km.

Travelling by car will take you just over five hours. The train is 2 hours and twenty minutes.

Everywhere should have these trains – particularly Australia’s east coast. It would solve so many issues and yet the government continue to sit on their hands. Sigh.

5. You don’t need to know the language because people will help you

This is probably the only thing about Japan that stumped me a bit.

English is rife in Tokyo, but less so outside the bigger cities. There’s is absolutely nothing wrong with this – I definitely do not expect everyone to speak my native tongue because that’s super jerky.

It is however a little bit more difficult to figure out the names of places when they’re written in hiragana, katakana or Kanji – particularly if you’re not used to writing systems like these.

Luckily, people are super helpful and will assist you in figuring out exactly where you need to go, should you get stumped.

Read more: The Super Weird Side of Japan

6. The food is out of this world sensational

Now, let’s talk about the food.

Confession – I hadn’t had Japanese food for two years when I travelled to the country, thanks to an unfortunate bout of food poisoning after visiting a Japanese restaurant in Australia.

Ho boy – had I been missing out.

Travelling to Japan helped reignite my love for Japanese food. I could honestly have seafood for breakfast every day.

Not to mention the sweets. Next time I travel to Japan, I’m bringing an empty suitcase so I can return with as many types of desserts as possible.

7. The Japanese have a strong sense of culture and it’s fantastic

Japanese culture is special, particularly when it comes to blending old with new.

While the country’s culture has evolved over the years, there is still a large emphasis on a strong sense of tradition within the country.

I think the holidays at the end of the year provide a perfect example of this. Christmas, a time that is traditionally spent with friends, perfectly demonstrates newer Japanese traditions.

KFC has oddly become a Christmas tradition, where families around the country feast on some crispy southern fried on Christmas Eve. The lines can be hours long and orders put in months in advance.

Yet New Year’s Eve is a time for family and reflection. One popular thing to do is to see in the New Year at a local shrine and line up, to toss a coin in and make a wish for the future year.

If these traditions aren’t balanced in the best way possible, then I don’t know what is.

This after all, is the biggest reason to visit Japan at least once in your lifetime. You won’t find ANYWHERE else like it, in the world.

Japan is unique. Its history, its culture, its sense of tradition, its tendency to look forward into the future. All of these factors combine into one result in a place that will be unlike anywhere else you travel to in the world.

So, why visit Japan? I hope a few of these reasons have convinced you to go. If you have been, what did you like about it? What didn’t you like? Would you want to visit again? 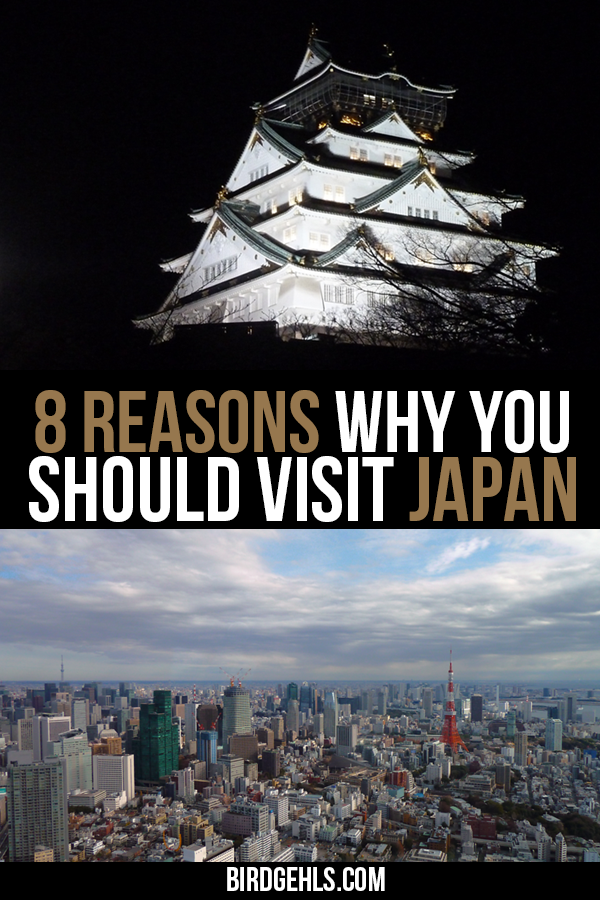