Melbourne Break Room is a place where you can go, to quite simply, smash things. A fun activity for friends, couples… or the newly single. Find out everything you need to know before you go.

Get passed over for a promotion? Get dumped? Just having an outright bad day or week?

What if I told you that there is a place in Melbourne that will put a helmet in your head, stick a baseball bat in your hand and allow you to smash things in a self-contained room, accompanied by the music of your choice?

Would you believe me? As I’m not lying, not one bit.

What exactly is The Break Room in Melbourne?

These sort of spaces exist in places around the world, also known as ‘anger rooms’.

They allow groups or individuals to either use their own carefully selected items (or bring their own). You can then spend up to twenty minutes smashing the bejeebers out of them, in a controlled environment.

This smash room in Melbourne is good fun and possibly cheap therapy.

How does the Break Room work?

When you get to the Melbourne Break Room, you’re given a thorough safety introduction.

A lot of it is common sense, such as “Don’t try to make snow angels on the piles of broken crockery and glass in the room”. I feel this is self-explanatory.

You then sign a waiver, stating that if you do choose to make snow angels in the scraps, you do so at your own liability.

From there, you’re outfitted with a pair of white overalls and led through to the rooms.

Each person gets a crate of items to smash, all of which are sourced locally from op shops. There are add-ons you can buy, such as a crate of larger items, or assorted ornaments and old electronics littered around the establishment.

We added on a crate of larger items, which cost another $45, but as it was shared between four people, didn’t amount to much more of an expense.

You can also bring your own breakables and the team will handle the disposal. They may charge a small fee for larger items.

Only one person is allowed in the room at a time, but if you’re in a group, you’re allowed to watch the smasher through a viewing window.

You are given thick gloves and full face protection. You select a playlist of choice (I went with my favourite dark classical music playlist on Spotify, which begins with Danse Macabre – you may recognise it as the intro song to the old British crime series of Jonathan Creek), grab the baseball bat that best speaks to you and enter the room.

Need to work through some aggression? Check out The Break Room in #Melbourne, where you're let loose with a baseball bat in a room full of breakables. Fun. #TheBreakRoomMelb Click To Tweet

In the Break Room

The fun begins as you start smashing your way through the items in the crate!

You can throw them up in the air and take a swing with the baseball bat, trying your best to hit them.

Others are fun to just hurl straight at the wall, particularly if they’re larger items.

If you run out, there are plenty of remnants of things littering the floor that you continue breaking. You could even just smash random sections of the pile of breakables, with your bat.

When you’re done or the twenty minutes are over, you exit the room feeling calm, cool and collected… like you’ve really worked through something during your time in there.

From a sustainable point of view

Admittedly, my first thought going into the Break Room was “Am I just creating more waste by doing this?”

So, I asked the staff a few questions before I went in.

They pointed out that very little of what is donated to charity and op shops goes on to get sold. They’re generally drowning in donated items and much of which is chucked by the shops to rots away in landfill.

The way they see it, by taking these unwanted items to The Break Room, they’re giving them a second life. And helping the local shops shift some of their unwanted items.

They empty the rooms out about once a month (what you see in the pictures in this post is about three week’s worth of breakables) and take what is left out to the tip.

However, they’ve just started working with an environmental group to repurpose the breakables into a material which will be used to build roads.

They’re also salvaging metal from the scraps to be melted down and reused.

↠ RELATED: A GUIDE TO THE STREET ART IN MELBOURNE

Can I go to the Melbourne Break Room alone?

There are two rooms to break stuff in. One is better suited for more people, as it has a viewing window.

However, the second down the back is much more isolated. Groups can stand and watch at the door, or someone attending the rooms alone could be granted utter privacy during their twenty minutes in the room.

What should I wear and bring to the Break Room?

Maybe quite obviously, you’ll need enclosed shoes. It’s ideal to wear thick-soled shoes, such as boots (Doc Martins would be quite ideal in this situation).

Brands of sneakers like Converse and Vans may be fine, there is a small risk of stepping on a rogue piece of glass and having it pierce through the shoe.

In terms of clothing, you will be wearing the protective overalls. However, it’s best to wear long pants underneath. Leggings are fine.

Perhaps don’t do what one guy we saw there did and strip off your t-shirt before putting the overalls on.

He was covered in sweat and I can’t imagine that would’ve been pleasant for the next person who had to don that same pair. Pongy or what?

In terms of what to bring to the Melbourne Break Room… you can take along any props of your own that you fancy smashing.

I would have a song choice floating around in your head so you can get right down to it. And bring a lot of enthusiasm!

Where is the Melbourne Break Room, when can I go and how much does it cost?

The Break Room in Melbourne is located at 29 Budd St in Collingwood.

It’s closed Tuesdays and Thursdays, open from 6:30pm on Monday, Wednesday and Friday and from 11am to 10pm on the weekend.

It’s a lot of fun and I highly recommend checking it out. I think it would make a great option for a rendezvous with a special someone (or an ideal place to head to straight after a breakup).

Have you been to the Break Room in Melbourne? Did you have a smashing good time? 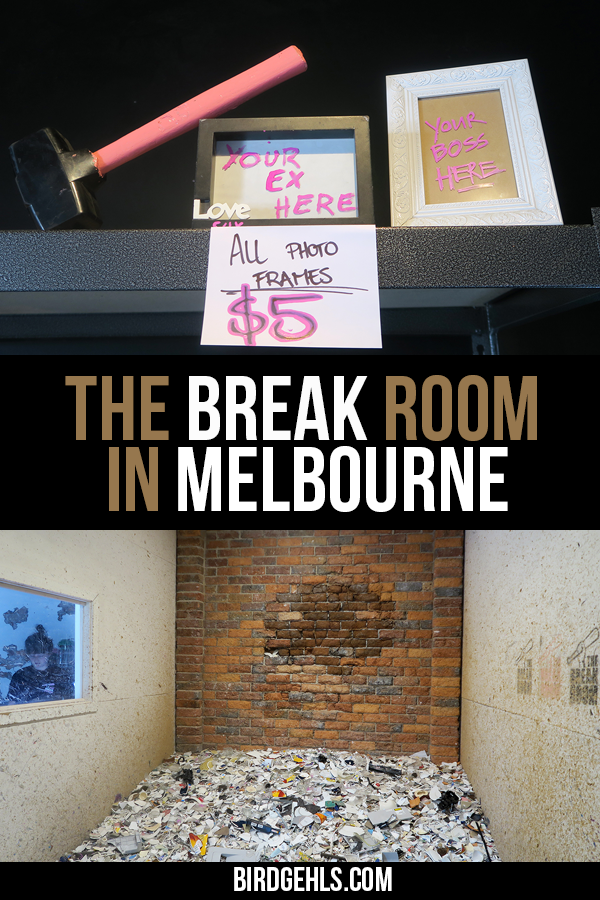 Silo art has really taken off in Victoria and around the rest of the country. The original Silo Art Trail is now one of the most popular road trips in Victoria. Read on to find out more about this trail and the vibrant murals, breathing life back into tiny regional towns. While Melbourne is well-known…

What are your resolutions for 2017? Do you even keep resolutions? I’ve heard of people swapping them out for goals or “affirmations” – but I’m a traditionalist. I like making resolutions, even if I don’t end up achieving all I hoped for. Life sometimes gets in the way and that’s totally okay. My main resolution…

Sydney is a large, sprawling metropolis with plenty to explore. Choosing where to stay in Sydney can be the hardest part of your trip, particularly as it doesn’t have the cheapest accommodation options. This article will help you decide where to stay in Sydney, whether it’s your first time in the city or your tenth!…

Here’s a comprehensive list of what not to do in Australia. Don’t litter, don’t feed the wildlife and respect the land, and you’ll be fine.

There are various cities around the world who for two days of the year, fling open the doors of buildings that normally deny access to the public. They’re known as Open House [insert whichever city is in question here] (such as London, Bendigo, etc) and it’s quite simply, a marvellous event. Melbourne is one such…

Several hours north of Perth, is the town of Northampton WA, which is dotted with painted fibreglass sheep statues. It’s an excellent stop off on a road trip from Perth to Kalbarri. Read more about the Northampton sheep and the town’s ‘Ewe-Turn’ festival below. Drive through Australia long enough and you’ll see any amount of…