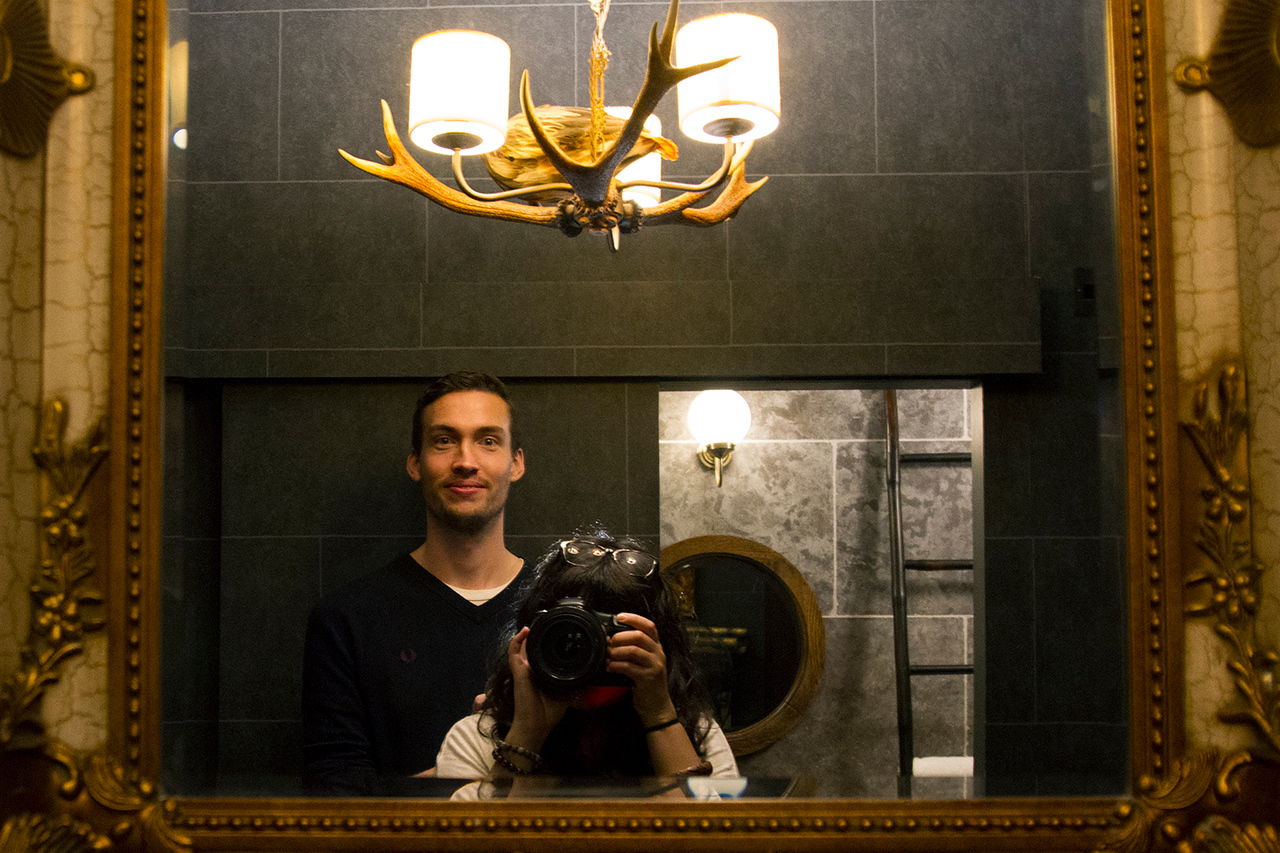 Mirror selfie in the Wizarding Chambers.

If you’re a Potter fan, there’s probably no better place to indulge in the mania than in London. You know. That nondescript city, on a tiny island where you can essentially be whoever you want or do whatever you want to do. And you certainly won’t ever run out of activities to amuse yourself with.

Do what the sign says. Bow down to peer pressure.

I have been a nutty fan of the books since I was nine years old (oh goodness, this means for almost twenty years now) and go to nearly everything Harry Potter themed (and we can all agree, there’s a lot of options flying around the world). The newest event on offer at this point in time was the British Library’s History of Magic Exhibition, which covers the history that heavily influenced Rowling’s writing of the books. You can buy the book on the exhibition here.

I figured during my last trip to London, I’d go the whole nine yards and do a few things that were still on my London List (it’s never going to get any shorter, not ever). Several were Harry Potter themed and one in particular, was spending the night in the Wizard Chambers at the Georgian House Hotel in London.

Our bed for the night. Unfortunately it was all red, when we are both Ravenclaws.

The hotel’s rooms are not directly affiliated with Rowling’s beloved character, hence the name “Wizard Chambers”. However, it is an opportunity to enter the land of magical fantasy – perfect for those whose Hogwart’s letter got mysteriously lost in the mail en route to their house (I believe to this day that it was Errol who was tasked with delivering my acceptance letter, hence why I never received it).

Although the rooms have been extensively written about across the interwebz… I don’t want to spoil the surprises for anyone wanting to visit too much. However, I will say that the staff put on a big effort to make a real night of it for their guests. The lead up into entering the room is pretty special and they have an extensive stack of HP DVDs available to watch in your Wizarding Chambers. We started watching one, but were pretty exhausted (we hadn’t arrived at out room until quite late in the evening) and fell asleep straight after.

Love a little bit of taxidermy, even if it’s fake.

The booking of the room includes a “Wizarding Breakfast” – I ordered the ‘Forbidden Forest’ Full English and it was delicious. There’s also the option to go down to the hotel’s bar and make your own potions (or, delicious, delicious cocktails) at a special workshop during your stay.

In the wizarding… bathroom?

Make sure you book well in advance, as the rooms tend to go quickly. I reserved a room five months before my trip. Breakfast is included in the price if you book via their own website.

Other Potter-related activities in London

Years on, I’m still not sure of how I personally feel about the Studio Tour – I’m a traditionalist who prefers the books, over the movies.

However, there’s no denying that other fans have loved it and I’m probably an old sourpuss anyway. Go there and enjoy yourself.

Have a Butterbeer at The Social Eating House

The Social Eating House in Soho is not only a grand place to have a meal (speaking from experience here), but it offers up some deliciously literary themed cocktails, inspired by the likes of the imaginations of A. A. Milne, to Beatrix Potter and Roald Dahl.

It’s the place to head to if you’re in the mood for some Butterbeer – or Half a Pint o’ Buttah, as it is referred to on their cocktail menu. 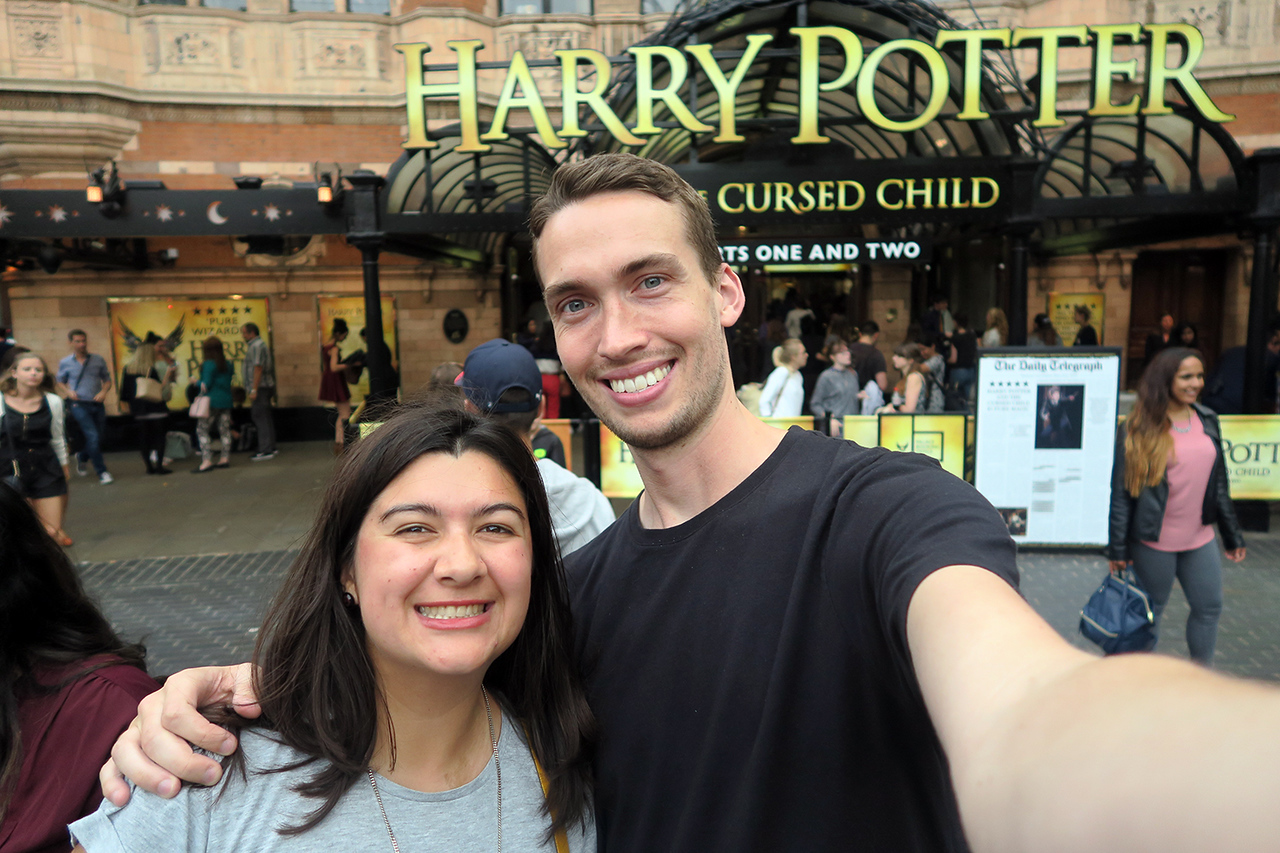 Outside for Part One of Harry Potter and the Cursed Child in 2016.

This was a top three highlight for this HP fan, during my time spent living in London.

I somehow managed to score tickets to the first run of Harry Potter and the Cursed Child. It remains the greatest stage show I have ever seen in my life. I go to a lot of shows. Trust me, it’s good.

Related: Why Harry Potter and the Cursed Child is Worth the Hype

Privately, I kick myself for not having done this years ago, as now there is an eternal line and a tacky gift store next door. Yet, if you’re a super big Potter fan (and have a bit of time to wait on your hands), it’s something worth doing. I guess.

Leadenhall Market, the setting used for Diagon Alley in the films.

Take a Harry Potter Themed Tour Around the City

Now this looks like fun. You can partake in a free walking tour to various settings of the movie, located around the city. And if you’re after some other neat tours to do around the UK’s capital, refer to this list.

It’s probably also worth taking a day trip out to Oxford if you have the time (mostly just because it’s a nice place) to see some more sights from the movie, such as the Bodleian Library and ‘The Great Hall’, at Christ Church College.

Related: Should You Visit Cambridge or Oxford?

And if you want to go full Potter during your trip to London, refer to this wonderful, wizarding packing list.

What have been some of your favourite Potter-themed activities in London?

PS. If you’re looking for other cool places to stay in the UK, why not try sleeping in a church overnight?

Please note – this post contains affiliate links, which goes back into the maintenance of this blog. Thanks for your support!

17 Best Things to Do in Poole and Beautiful Dorset

Admittedly I’m not a Harry Potter fan but I have to say the unique experience really sucked me in. I think for anyone who is into Harry Potter or just an adventure that seems like a really entertaining way to immerse yourself in the experience. But you said there’s surprises you didn’t mention: now I’m curious! 😉

Haha they’re not massive, massive surprises, but I feel like the hotel puts a lot of work into the whole “production” and I wouldn’t want to ruin that for anyone. I imagine it would be jolly good fun even if you’re not a fan. It’s always nice to stay somewhere that’s a little bit quirky and different!

I’m beyond jealous that you stayed here. As a devout Ravenclaw, I think that I need to book in here on my next visit to London

As a fellow Ravenclaw, I totally agree!

Great post, It remains the greatest stage show I have ever seen in my life.

Thank you! Same, I snuck a second viewing in at home in Australia and it was just as magical.