My mornings tend to involve a fair bit of haste. By haste, I mean, chaos. The kind of chaos where you rush up and down stairs in a panic, grabbing keys, coat and handbag whilst cramming toast into your mouth and wondering where on God’s earth you put your Metrocard. I like to assume that everyone goes through a similar process and the obviously representative sample size of myself and three housemates indicates that this is, in fact, the case.

By the time I leave the house, however, I like to imagine myself as a picture of calm, ready to take on the day. It seems that this, in and of itself, marks me out as a foreigner. You see, I have the suspicion that New Yorkers have embraced the subway as an extension of their own homes; part and parcel, if you will, of the morning, pre-work ritual.

Most commonly, this manifests in the gigantic cup of Starbucks coffee clutched tightly in the hands of many passengers. There are variations on this theme: Dunkin’ Donuts and the occasional local coffee shop also do a roaring trade in commuter coffee. But Starbucks is the most noticeable. Mainly because the festive season is upon us & Starbucks cups are the kind of red that stands out amidst a sea of black winter coats.

However, the incorporation of the subway into the morning pattern of getting ready goes beyond the lifeblood that is coffee. Women who are lucky enough to be seated, and even those who are not, whip out mirrors and dazzling arrays of cosmetic products. The effect of this can be quite startling. In the course of a subway journey, the lady you are sitting next to can be completely transformed in appearance. I am transfixed by their skill, amazed that they have learnt to so effectively modulate their application so as to accommodate for the shuddering jolts and stops of the train. Not one person has stabbed themselves in the eye with a mascara wand to date. In terms of probability, I think this defies the odds.

The completion of the morning toilette on the subway is not, however, a solely feminine habit. To the contrary, men are just as complicit. This occurs to varying degrees. The final application of cologne is not uncommon. Neither is the discrete tidying of the hair. However, the act that takes the cake is one reported to me by a good friend of mine and fellow newcomer to New York.

Allow me to set the scene:

The carriage was fairly packed. The crowd was what one might call corporate. Suits, ties, briefcases and double-shot coffee cups abounded. It was this sense of a professional, purposeful setting that made my friend at first doubt what was occurring in front of him. For you see, with a sort of insouciance which suggested he felt that this was perfectly normal and acceptable practice, a gentleman standing next to the subway door had coated his face in shaving cream. Whipping out a razor, he had then begun to shave, utilising the reflection in the window pane as a mirror. Little flecks of shaving foam fell to the floor. The man even hummed as he shaved. 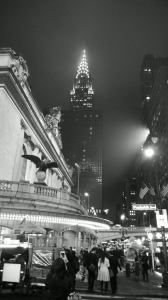 Fellow passengers at the time, however, seemed entirely unconcerned. A man was shaving. In front of them.  On the subway. He was leaving his shaving foam and whiskers on the subway floor. AND NO ONE had demonstrated even a skerrick of concern. As I said, flabbergasting. I half hope that I will see this man during his morning commute. Perhaps by now he will have extended his repertoire to include brushing his teeth on the train.. It would not surprise me.

Now obviously not everyone (or even anyone other than this man..) merges their subway experience so completely with their morning toilette. I am convinced, however, that most New Yorkers really do just consider it an extension of their hallway: part of the chaotic scramble to arrive at work on time and appropriately attired.

Moving to London: Everything You Need to Know

Moving to a New City Alone: 11 Tips on How to Cope

is a twenty something adventurer with a penchant for travel, for books, for cross country running and the culinary arts. Not to mention the occasional glass of wine ;)

I can barely avoid stabbing myself with a mascara wand in my very stationary bathroom!

I hear you! Never mind get a straight line with the eyeliner!

Highly reminiscent of that iconic car scene in ‘Mr Bean Goes to the Dentist’.

Now I want to re-watch all Bean.

Unbelievable! Using an electric razor would be conceivable, but using the foam…?

I know. It makes me suspect he had done it before!