Père Lachaise Cemetery, Where I Almost Lost My Mind 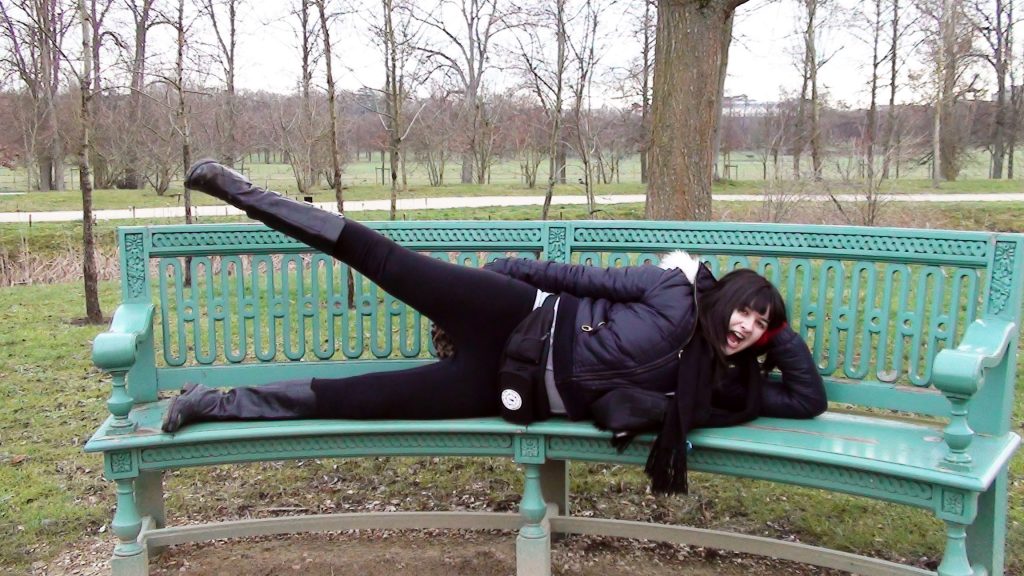 The first thing you have to accept when you begin travelling is the fact that somewhere along the line, something weird and/or upsetting is going to happen to you. You will experience heightened highs, but there will also be moments that will leave you completely and utterly emotionally scarred and at times, fearing for your life.

I’ve always had an interest in both history and the macabre. Therefore, visiting Père Lachaise Cemetery in Paris was a must-do on my list. Unfortunately, my travel companions at the time did not share my interests, opting instead to visit EuroDisney for the second time that week. Why anyone in their right mind would choose a theme park over a cemetery is definitely a decision I’ll never be able to understand.

I navigated the Metro with surprising ease and found myself where I needed to be. What I hadn’t anticipated was just how large Père Lachaise cemetery was. I was both map and internet-less and being a Gen Y who is totally dependent on technology, I wasn’t having much luck simply relying on ‘my wits’ to get me to where I wanted to be.

I wandered around aimlessly for a little while, taking rubbish pictures of random graves, whilst failing to find anything of interest. Eventually, I accepted defeat. I’d get on the Metro and journey back to my little French apartment, where I could sulk in the warmth to my heart’s content. I would probably pick up a baguette on the way. And a tarte au fraise. When in Paris!

My mind made up, I turned to leave. Then I screamed, as out from behind a gravestone jumped a wild-eyed Frenchman, with dreadlocked hair that cascaded down his back. He introduced himself as “Michel”, (not clichéd at all) kissed me emphatically on both cheeks and grabbed my hand.

“Jim Morrison?” He asked, then said, enthusiastically. “I take you to Jim Morrison!” 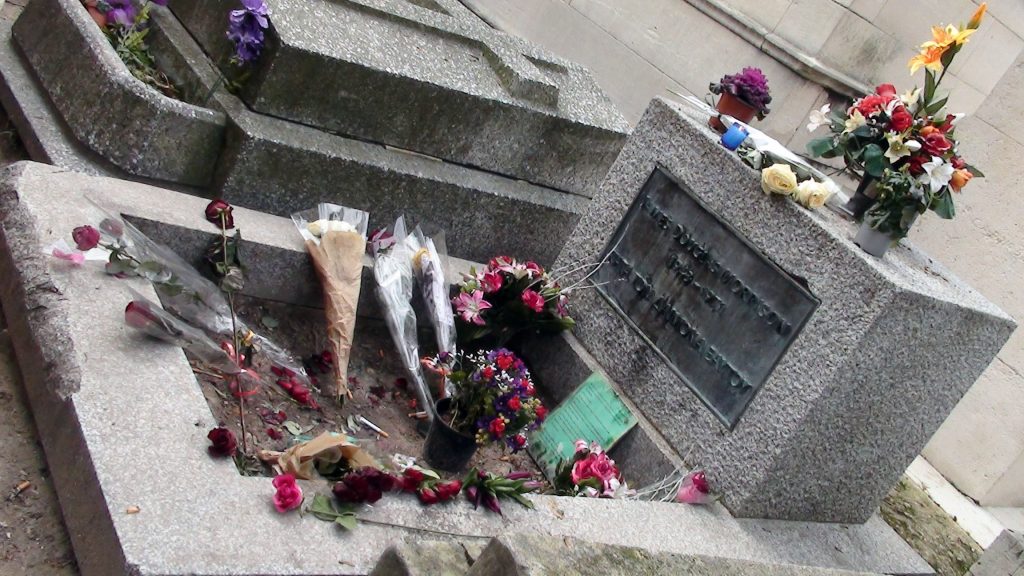 He was a man of his word, at least.

And so began a whirlwind tour of Père Lachaise Cemetery. I did indeed see Jim Morrison’s grave and along with it Chopin’s and Edith Piaf’s. I met “Jimbo”, the stray cat that Michel had adopted, leaving food and water for it at his grandparent’s grave. My personal favourite was Oscar Wilde’s – by far the strangest grave in the entire cemetery. 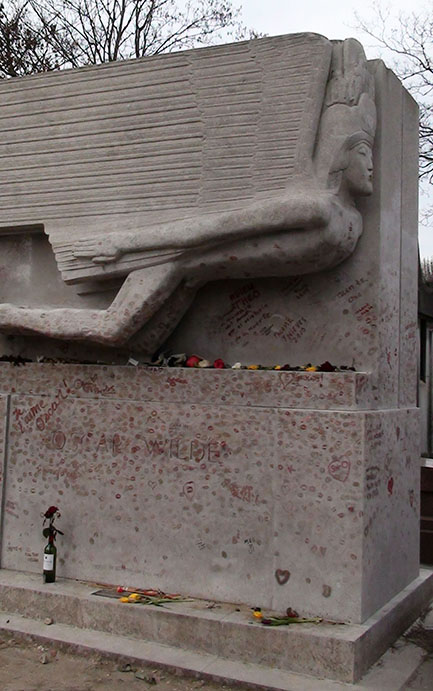 So many elements of this are confusing to me.

In going through my archived photos for this post, I see that twenty-year old me felt compelled to take a close-up photo of the broken-off penis of the “modernist angel” on Oscar Wilde’s grave, which is definitely something that I would do as a twenty-five year old today. I guess we are always growing and maturing as individuals. 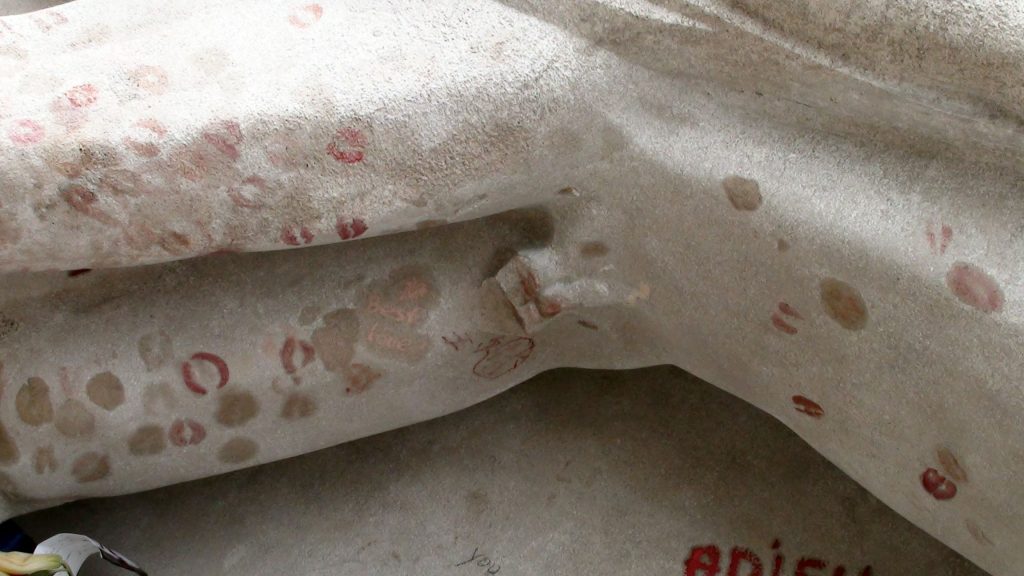 The whereabouts of this penis is one of the greatest mysteries of modern-day life.

I have to take my hypothetical hat off to Michel; he really did try his best to make the tour as compelling and interesting as possible. Unfortunately, his spoken English was about as good as my conversational French (which has gone from bad to worse over the course of the last few years) and half the time I had no bloody idea of what he was actually trying to tell me.

Which brings me to the Victor Noir incident.

For those of you who do not know, because I most certainly didn’t – Victor Noir was a French journalist, who was shot dead during a feud between Paschal Grousset, editor of the newspaper La Marseillaise and Pierre Bonaparte, the great-nephew of Napoleon. In short, the two had a disagreement and Noir, acting as a messenger, got caught in the crossfire – literally, when he was shot dead by Bonaparte in the late 1800s.

He was buried in Père Lachaise, underneath a lifelike sculpture which is designed to look as if he had simply collapsed on the street. The best part about this statue is; in looking at his pants you’ll notice that the corpse of Noir isn’t the only thing that is stiffening. As a consequence, this statue has gone on to become a world famous fertility symbol. It is said that if you kiss his lips and rub his bulge, your sex-life will improve and you may even find yourself a husband! (Score!) 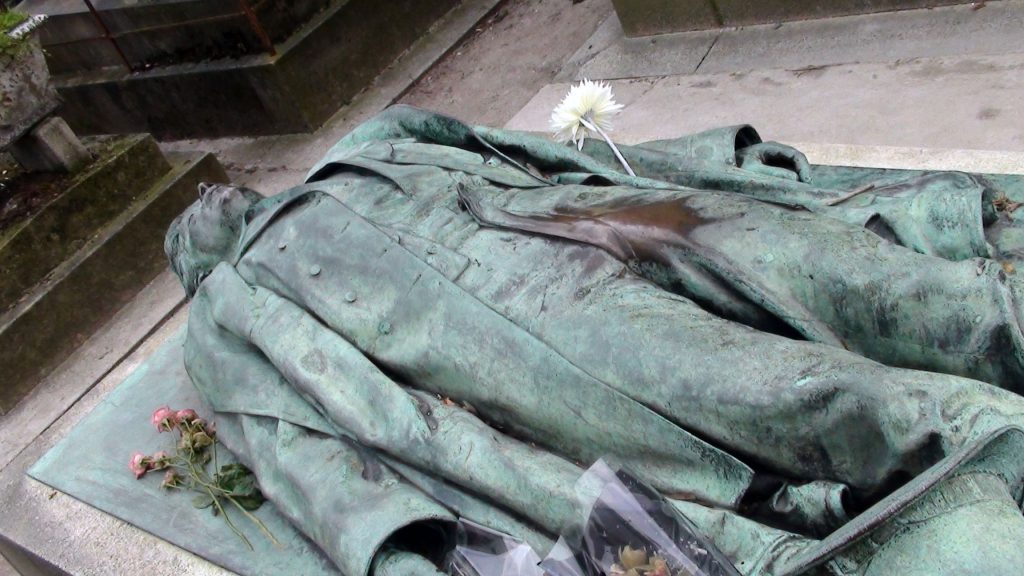 We were on our way to this particular grave, when Michel suddenly asked me:

“Do you have a boyfriend?”

“No,” I replied, then immediately thought: Damn it, damn it. Should have lied.

“What about a husband?” He continued.

“No!” I stated, once again without thinking. More mental face-palming followed.

Michel reached out and grabbed my hand, interlocking his fingers with mine.

“I be your boyfriend.” He declared.

I didn’t really know how to react to this, so I chose my fall-back response to anything upsetting that may be happening at the time. I shut down and rolled with it. Michel started telling me all about Victor Noir, in his broken English, the end result being that I became even more confused as to what was actually going on. Then when we got to the gravestone, he started peer pressuring me.

“Kiss his lips! Touch his feet!” He instructed.

“It will make you pregnant!” He declared.

“I am twenty years old!” I yelled back. “I do not want to be pregnant!”

Michel then grabbed my hand and started directing it towards the bulge in the statue’s pants.

“What are you doing?” I screeched.

“It will help you get married!” He roared back.

He then wanted to take me down to the crematorium, which is where I (finally) drew the line. I made some bullshit excuse about meeting my friends outside the cemetery, shoved some money in his outstretched hand and fled for my life.

It makes for one of my favourite travel stories now, but I still acutely remember just how terrified I was at the time. I really don’t know why I didn’t just cut it and run; I think it was due to some stupid reason, like not wanting to hurt the crazy Frenchman’s feelings. If you ever find yourself in a situation that makes you uncomfortable, then get the hell out of there. Better safe, than sorry, as the old adage goes. 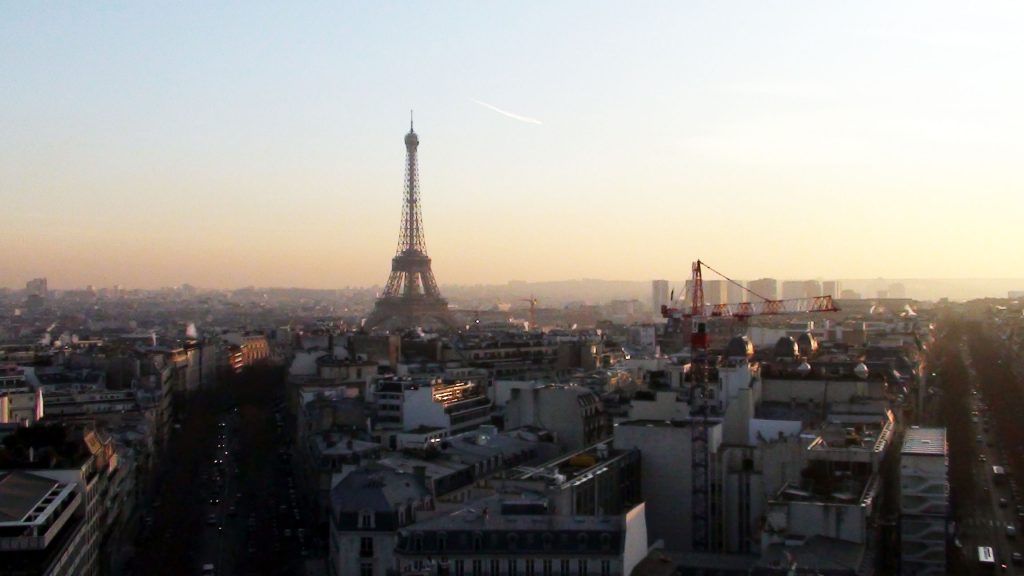 I still have mixed feelings about you.

Overcoming a Travel Curse to Finally Find a Friend in France

Strolling through the Streets of Aix-en-Provence

Joyeux Anniversaire – A Birthday in Paris.