What it’s Like to Attend Morning Gloryville in South London 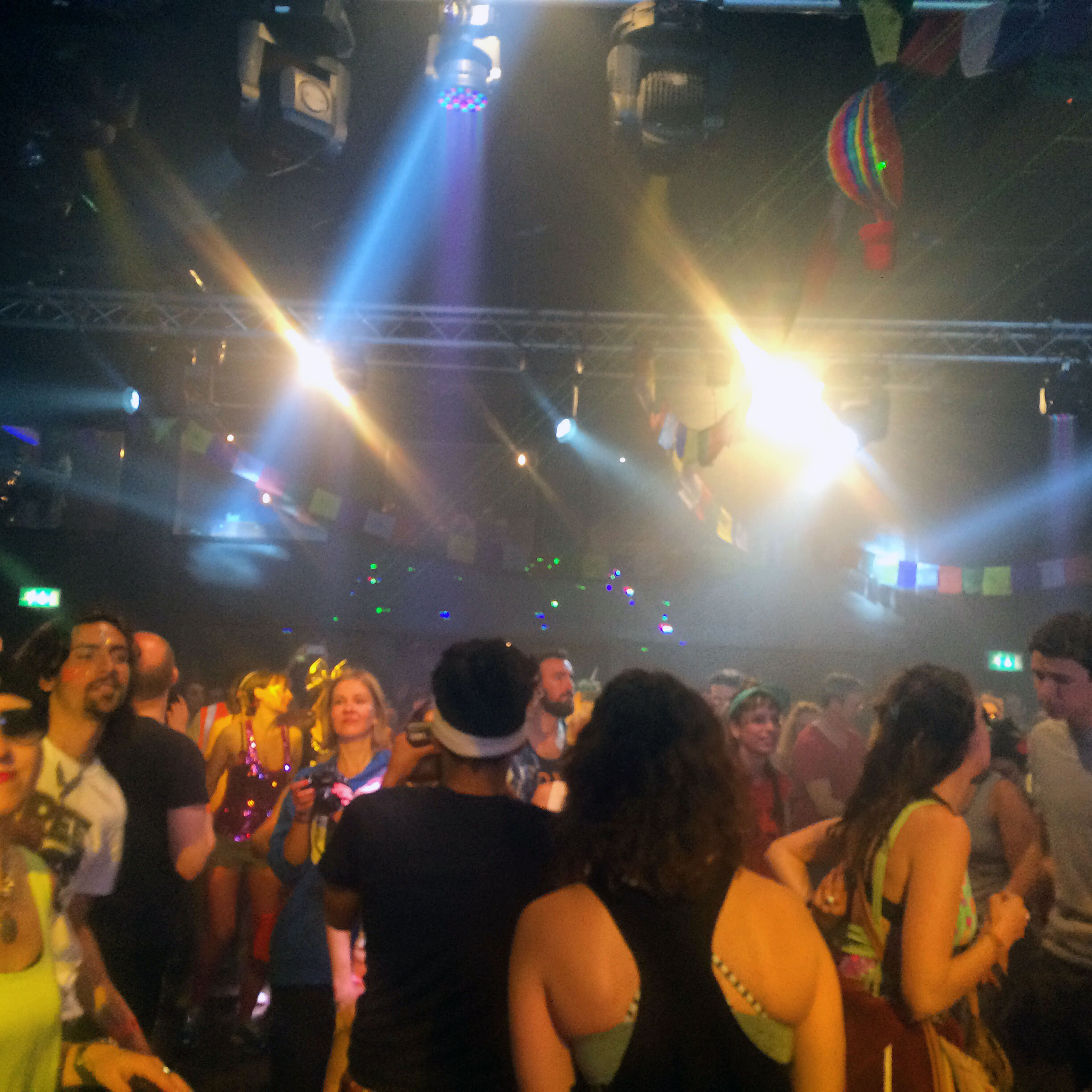 My alarm rang out, disturbing me from the peace of my deep slumber. I opened my eyes, fumbling for the snooze button.

According to my clock, it was 5:45 in the morning.

“Noooooo,” I moaned, pulling the covers up over my head. Yet, the option to re-enter the land of nod was no longer available to me. I had no choice but to get up and face the world.

I quickly showered, pulled on my pair of space-horse leggings and grabbed my bike. Outside, it was overcast and cold. The wind tugged at my clothes as I navigated through the back streets of South London. I should have worn a coat, I thought to myself. It was something I had been refusing to do since the calendar had ticked over into the “summer” months. In England, this was a choice that admittedly defied all logic and reason.

K was waiting for me outside the Ministry of Sound nightclub.

“Why are we doing this?” She asked, as she suppressed a yawn.

Because we had wanted to, for over a year. Kate had first found the Morning Gloryville event when we both still lived in Sydney. We had spent time at work marvelling over all there was to do in London. This event had been on the top of this list for quite some time now; we had just needed to wait for a date to be set in our neck of the woods. Finally, word had arisen – Morning Gloryville would be held in South London and by chance, we were both able to attend. We purchased tickets immediately, forking out 16 quid for the honour of attending.

At the gate, we were greeted by two girls who gave us big, lingering hugs.

“It is a bit too early for cuddles,” I hissed out the side of my mouth to K, as we made our way into the club.

We had glitter smeared across our faces and sprinkled in our hair, checked in our bags and navigated our way to the dance floor.

My immediate thought was – there are not a lot of people here. Those who had made the effort to turn up this early were mostly clustered around the coffee and tea carts. A few die-hards were already dancing.

“What do we do?” K asked. Neither of us had any money on us, having used my last few pounds to check in our bags. It was a shame, as I quite fancied a shot of cacao at this time of the morning.

We found a spot in front of the DJ and started attempting to move our bodies to the rhythm of the beat. This was more difficult than it should have been. I felt the music being played did not quite key in with the nature of the event – it seemed more a time and place for tacky 90s dance music, rather than the latest EDM hits. On top of that, the dance floor was still rather sparsely populated. As a double whammy, they had seemingly rather carelessly chosen to leave the lights on. This made dancing a challenge. I for one, am aware that I make all my best moves in the dark and behave accordingly. 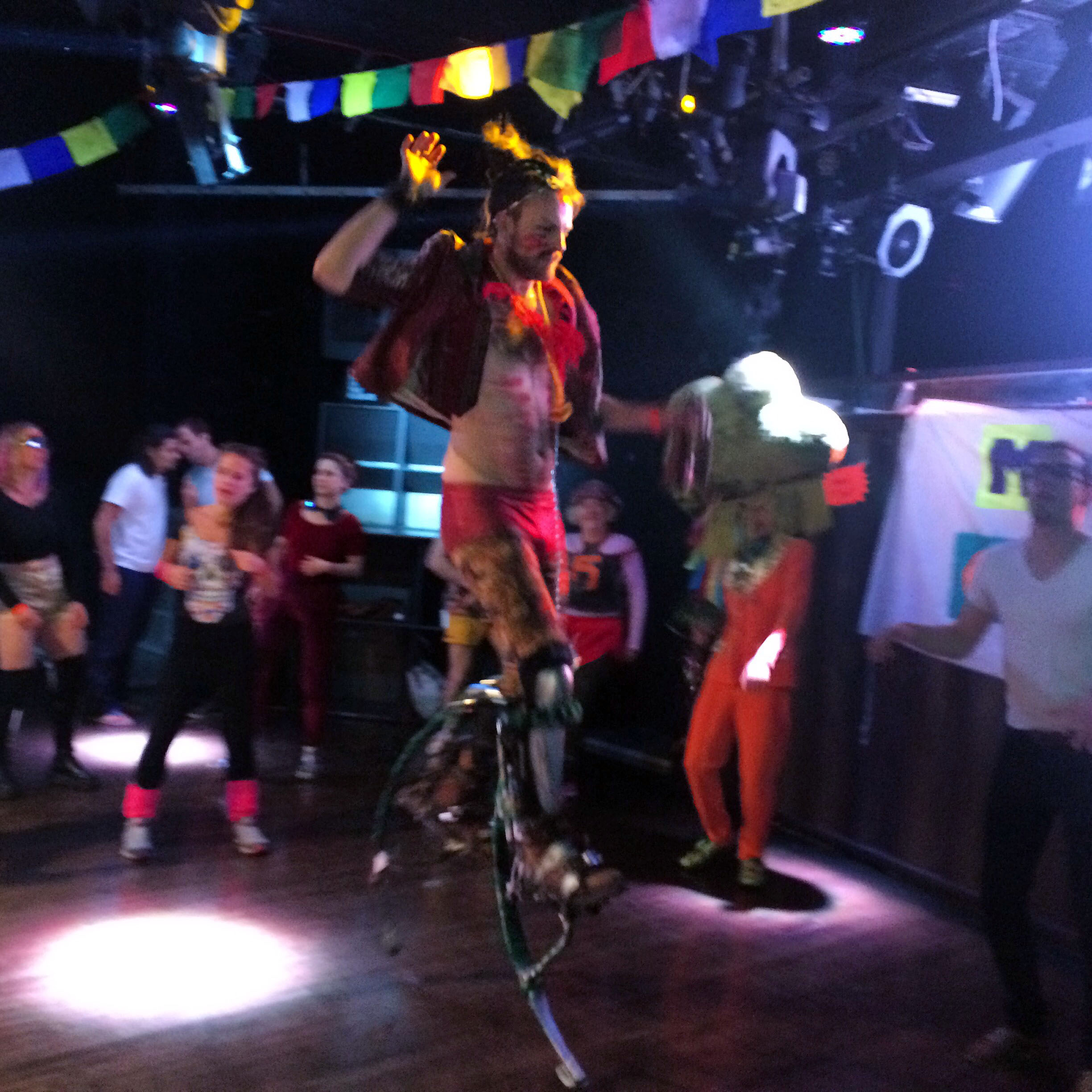 This dude managed to spend the entire time dancing on stilts. I was so impressed.

By around a quarter past seven, it started heating up. There was quite an array of people there – lots of girls and the occasional boyfriend who had clearly been dragged along by their girlfriends. Surprisingly, there too were boys who seemed to have actually come of their own accord. Some people were dressed up. Some, like us, were wearing gym clothes. Others were in their work outfits. A nice mix.

At around 8AM, I noticed a girl with a guitar standing off the side of the stage. The DJ stopped spinning his tracks, the room went dark and a single light focused on her. She started strumming her instrument and singing some beautiful, operatic melody. It was strange, but lovely. The song ended, she bowed with a flourish and exited off stage left. K and I looked at each other.

I heard via Instagram that shortly after we left, the DJ started playing Basement Jaxx. I could have done without this information, as it made me very upset.

I left on a high, crashing at 4PM with eight hours left in my working day.

Was it a strange experience? Yes. Worth the hype? I would say so. Would I do it again?