Joyeux Anniversaire – A Birthday in Paris.

Paris and I have had our issues in the past. It would not ordinarily be my first choice for birthday adventures.

If you read my last post on the matter, it may seem as though I was about to be defeated by my nemesis (which happens to be an entire city) once more. I am happy to report, that despite spending the majority of the trip suffering from what turned out to be food poisoning and correspondingly not being able to consume a single strawberry tart, I actually had quite a nice time. This is due to the presence of these three people: 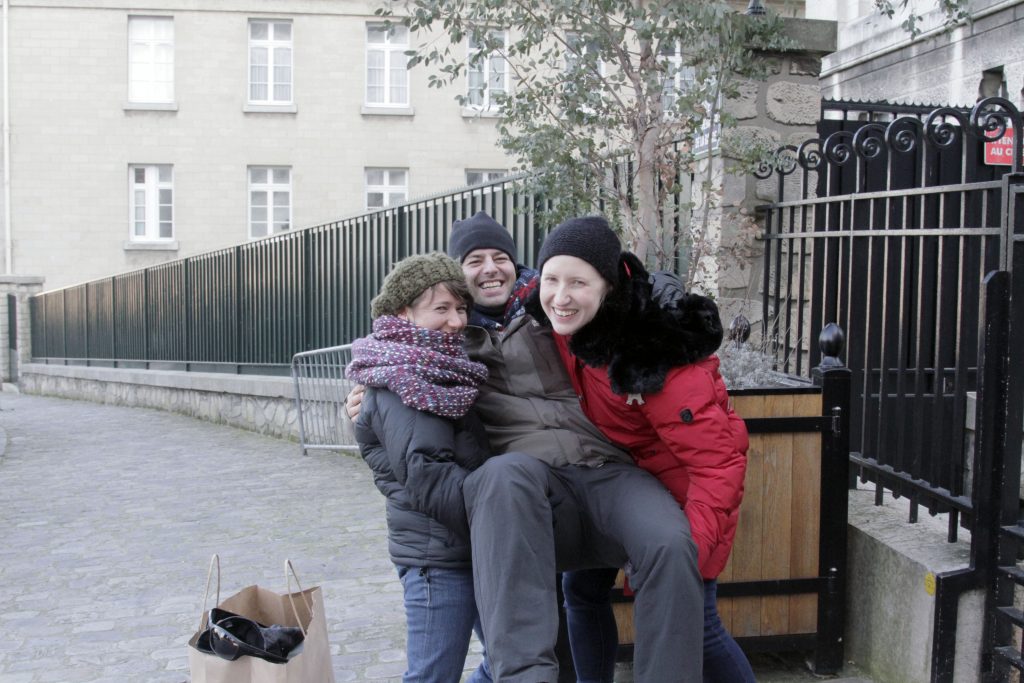 The necessary ingredients for a joyeux anniversaire.

I did eventually find my hotel, three hours before check in. They wouldn’t let me in early, so I dumped my luggage and wandered the streets of our arrondissement, until I found a café that did not sell Indian food, in which I could chill for the next few hours. Time passed, as it is ought to do and I stumbled back, checked in and greeted two of my three friends, who had just arrived.

We agreed to rendez-vous in a few hours time and I finally collapsed, exhausted, onto my hotel bed.

The next day we rose early to do the one thing I had missed out on the last time I’d been in the city – visit the Catacombs. (Handy hint – if you’re under 26 you get in for €8, so it’s an extremely good idea to go in on your last day of being 25). 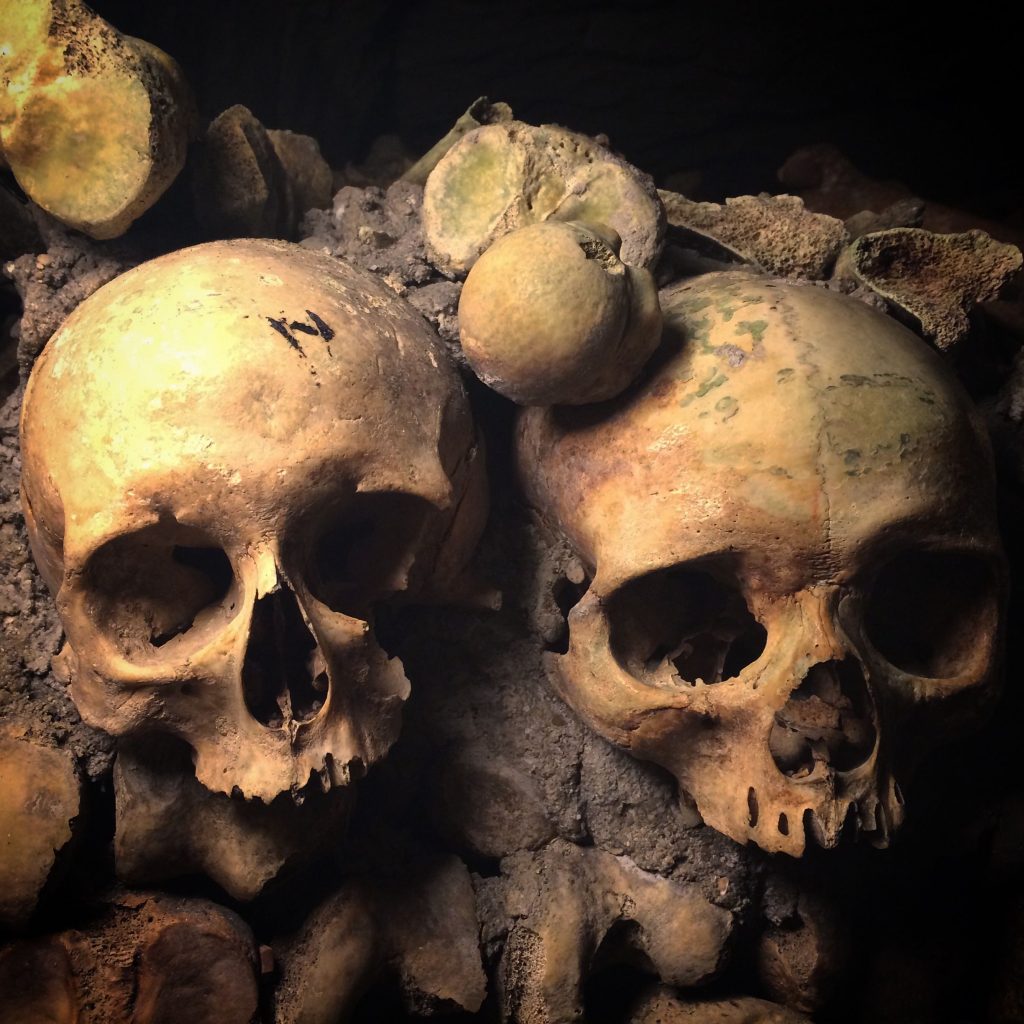 The Catacombs were unnerving. I imagined some repressed art school reject, sitting by his/herself (it would probably be a he, but as a feminist it is my duty to not discriminate by gender) alone in the dark, surrounded by thousands of human remains, building these obscenely macabre sculptures, whilst muttering to themselves: “I’ll show them… I’ll show them all!” 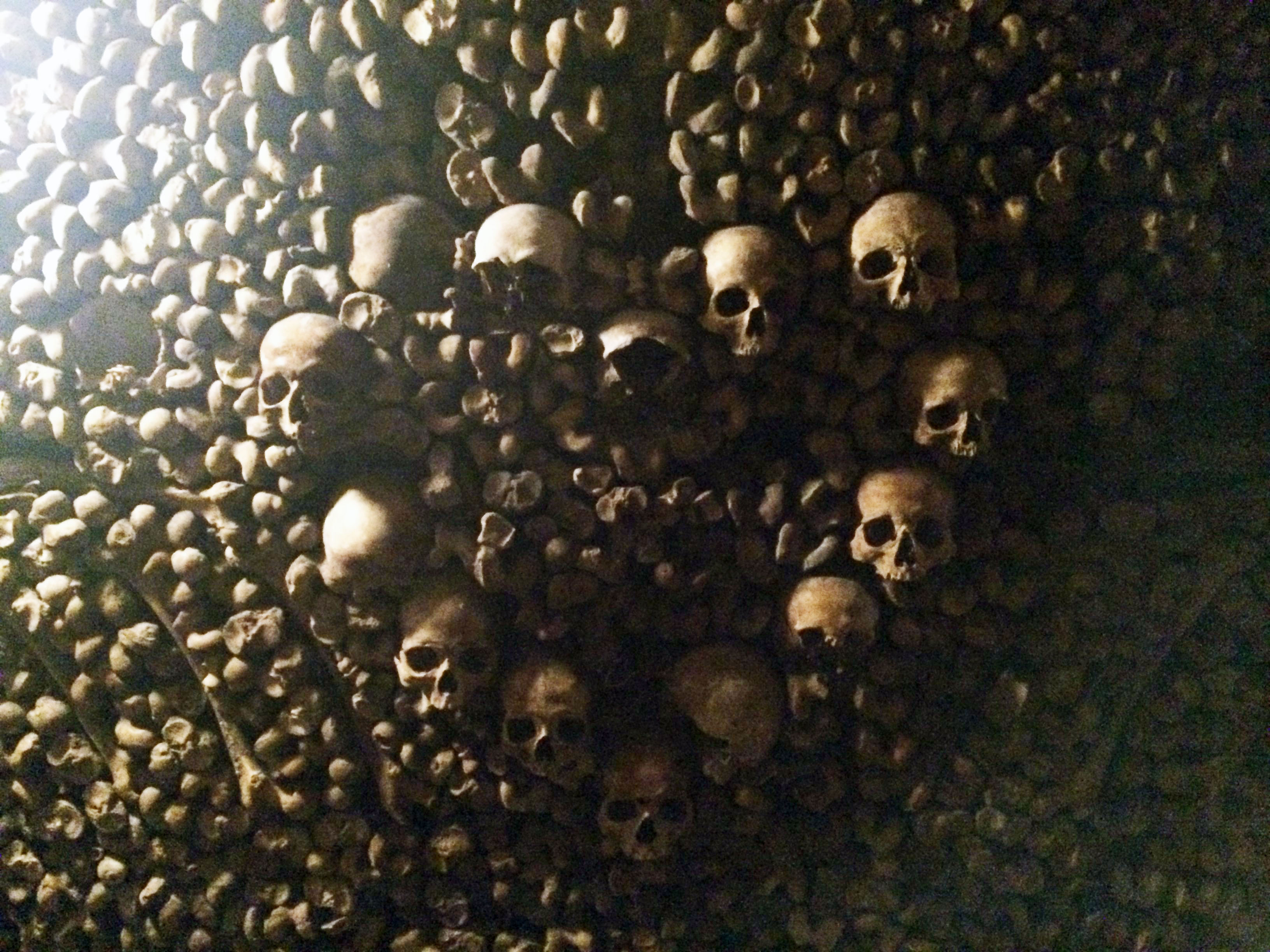 This isn’t creepy, not one bit.

Things got even more disturbing the next day. Wandering around Montmartre, we stumbled upon a shop front which had the following display: 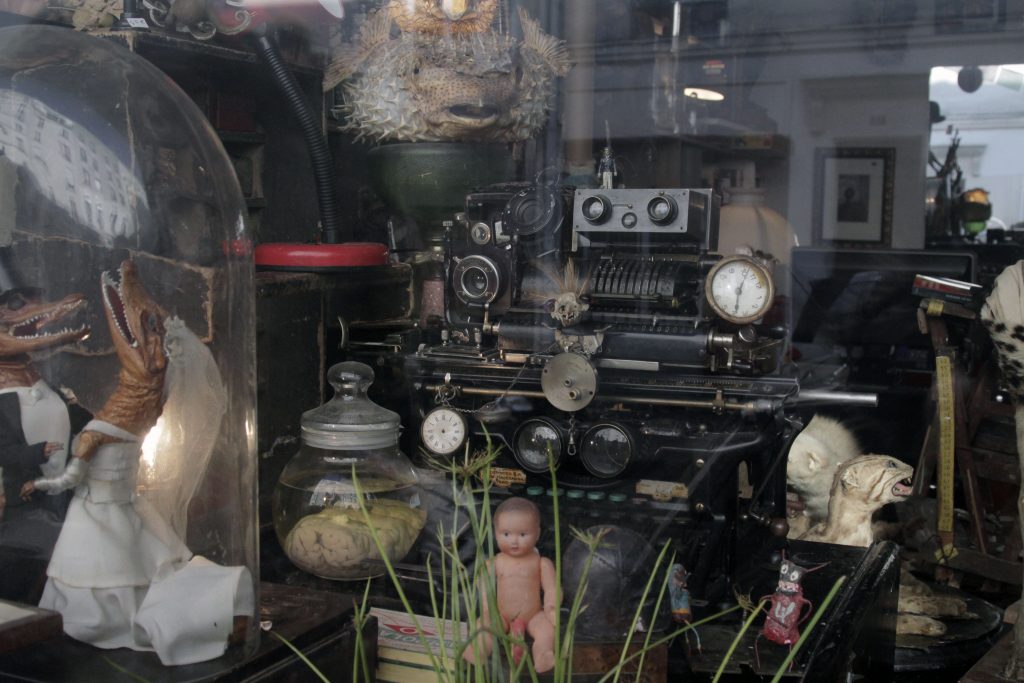 I couldn’t even begin to figure out what was going on here. Was that… a brain in a jar? Two stuffed crocodiles getting married? An extremely well-endowed baby doll?!

A PUFFER FISH LAMP WHICH I NOW WANT MORE THAN ANYTHING ELSE IN THE ENTIRE WORLD?! 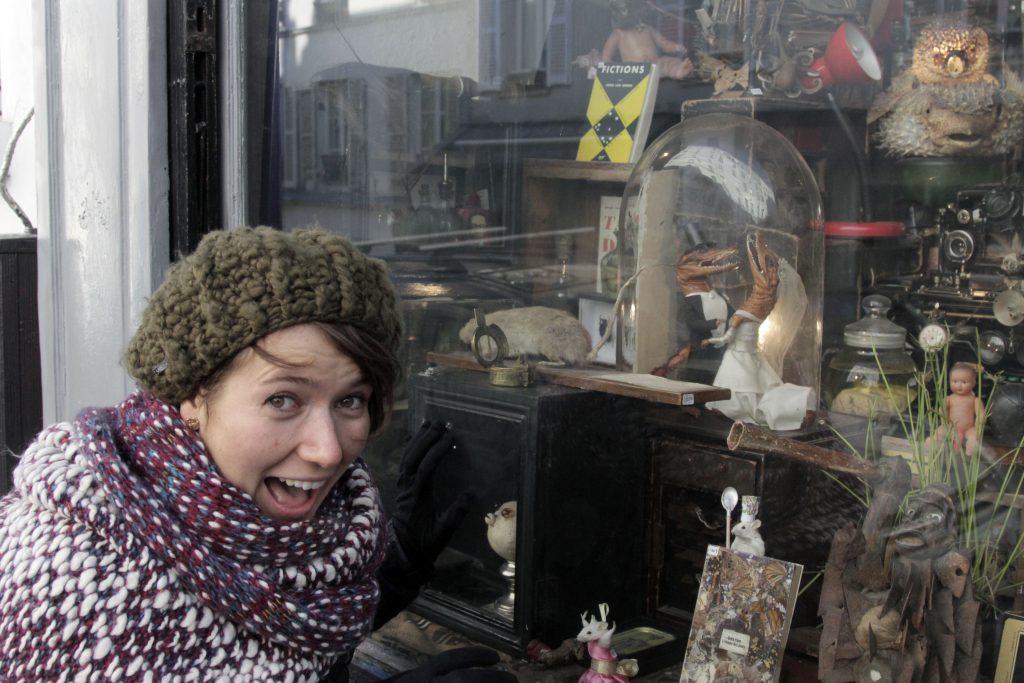 Very strange indeed. Yet, Paris was finally done messing with us. We found a delightful café in Montmartre for lunch: 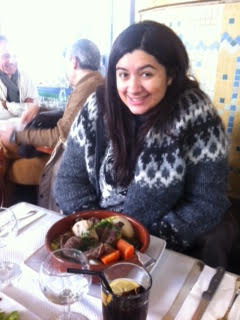 Birthday lunch of beef broth and stew, because I didn’t want to piss my stomach off.

Before continuing on to the Sacré-Cœur, without a doubt my favourite church in the city. 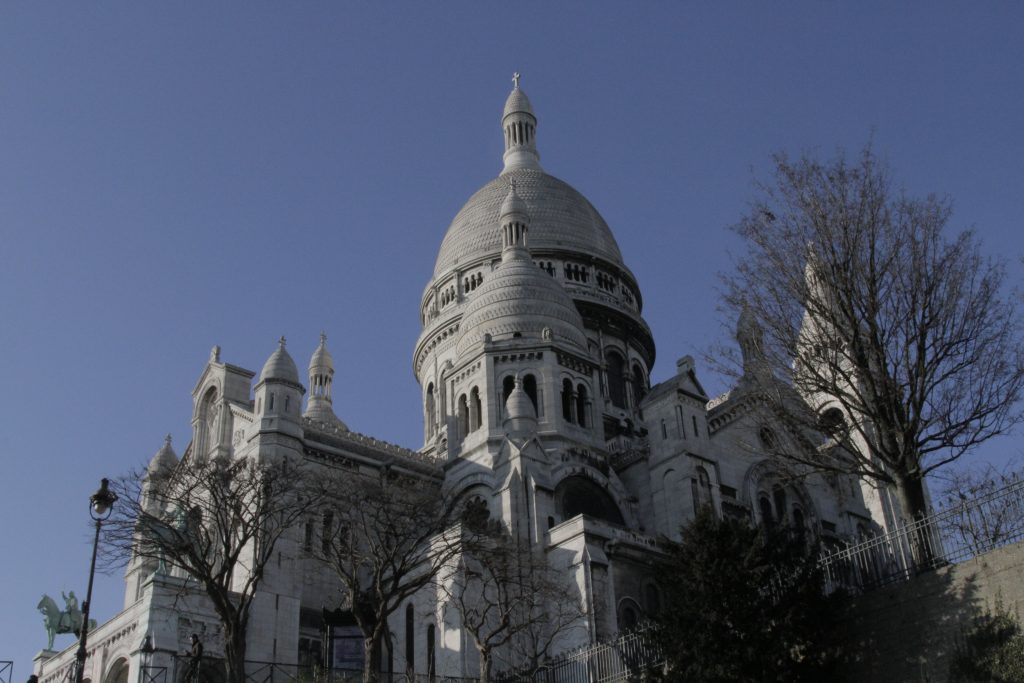 The afternoon was then spent wandering around Montmartre and into the various little shops that dotted the streets. I has been meaning to track down a vintage store I had read about online. I entered empty handed. I left with the find of the century (I’m calling it now). 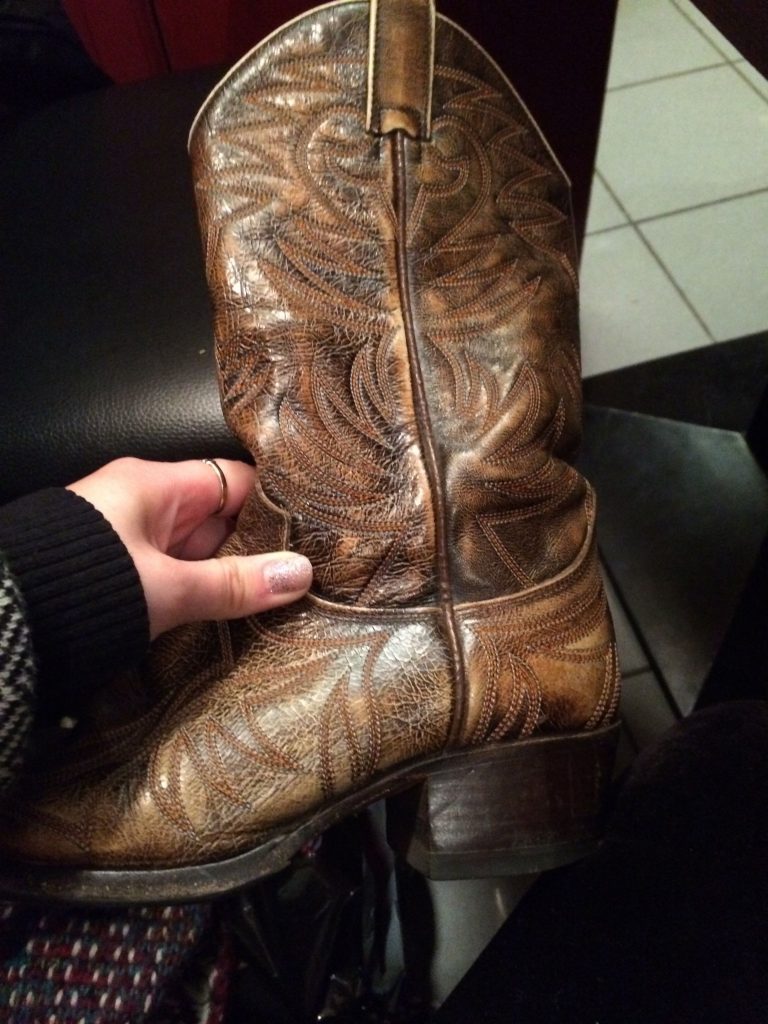 The day ended nicely with dinner at a nearby restaurant, where the gang sang me “Joyeux Anniversaire” in five different languages… all at the same time!

As for Paris… it is never going to be one of my favourite cities. Yet, I’ll take it for what it is… a halfway point between England and Switzerland. 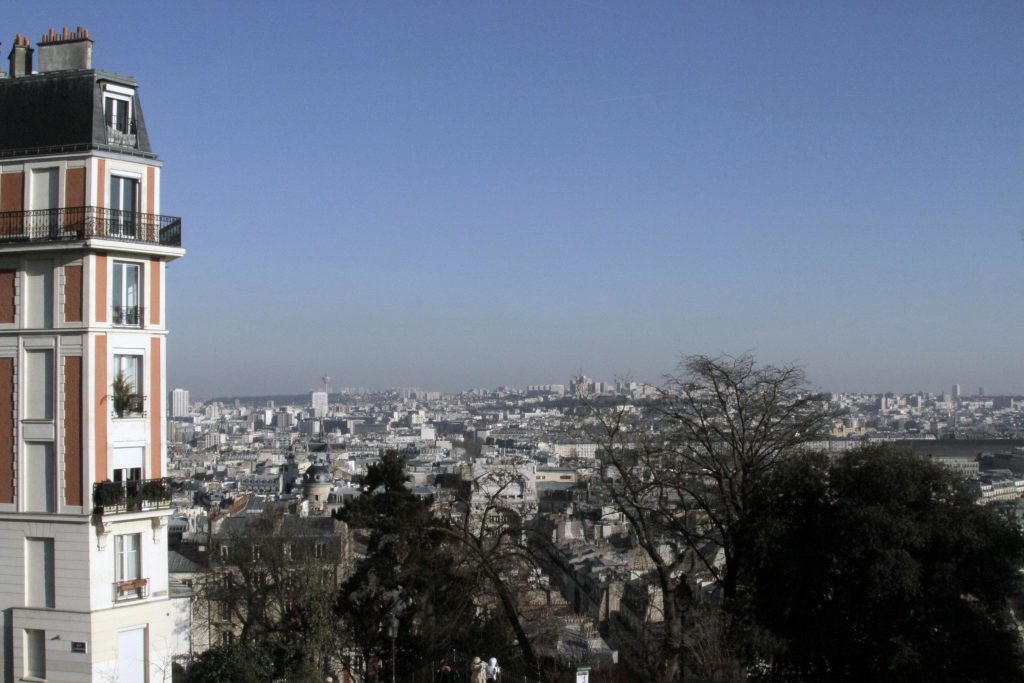 I’m warming to you.

Overcoming a Travel Curse to Finally Find a Friend in France

Strolling through the Streets of Aix-en-Provence