Blue is the warmest colour.

Morocco’s fourth largest city is, in a word – frenetic. A cacophony of sounds, a flurry of activity. While this is all very exciting, it’s not exactly a place I’d recommend going if you’re on the lookout for a bit of peace and hush hush.

That is, unless you find yourself in the Jardin Majorelle in Marrakech. Scratching your head and wondering how you got there, but not regretting your decision in the slightest. 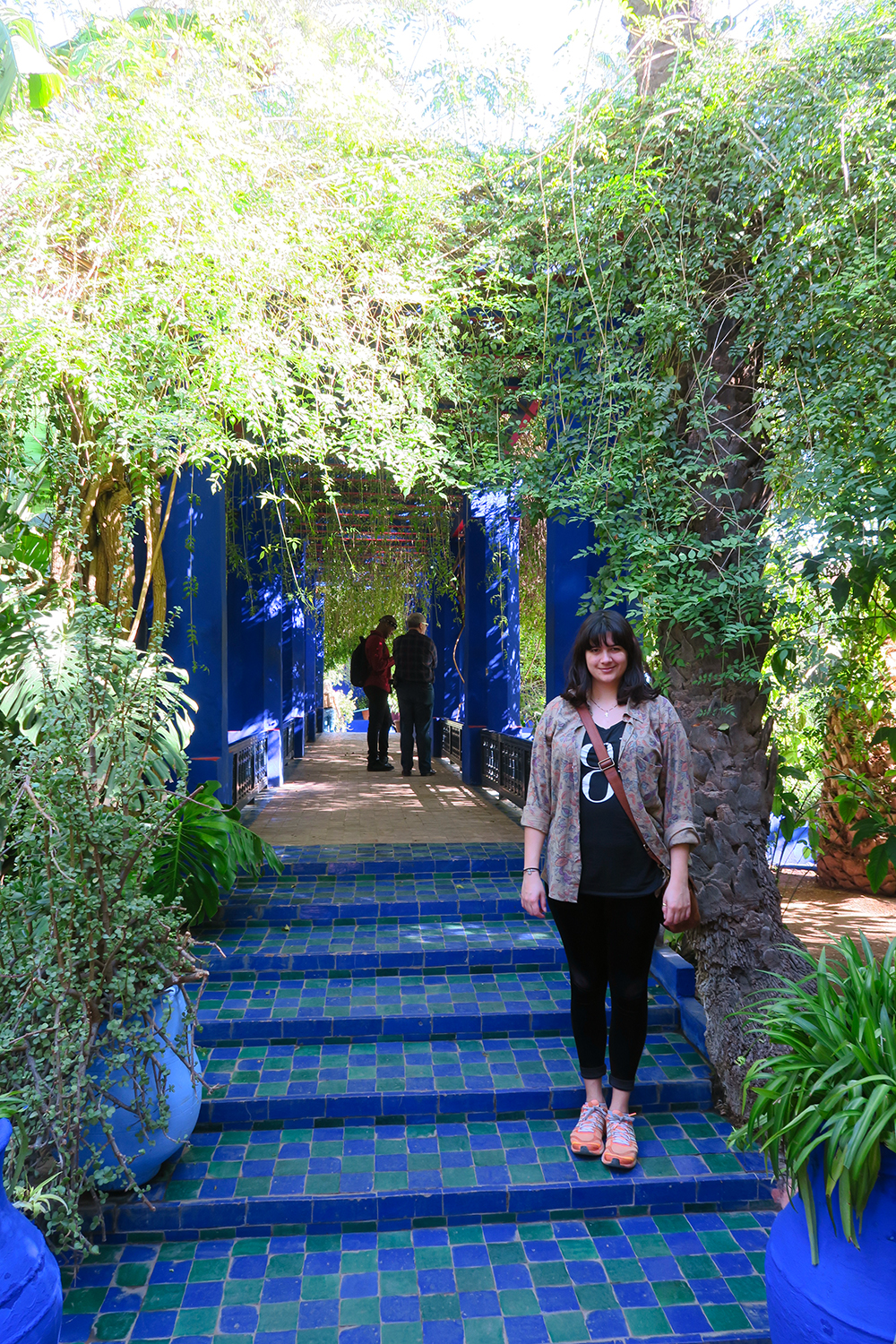 Wish I’d coordinated my wardrobe a little better, although I am plenty pleased with my hair.

First, a little bit of history. The gardens are named for Jacques Majorelle. A French artist who was captivated by the city of Marrakech, to the point that he moved there for good around 1919. Marrakech became his muse, with the artist painting street scenes and portraits from 1918 to 1930.

He bought a land plot in 1923 and got to work, designing a garden, constructing an artist’s studio and employing the architect Paul Sinor to design a Cubist Villa, which he called Bou Saf Saf. Majorelle himself turned his hand to the garden, planting specimens from five continents, that he gathered on his world travels. Being an artistic type, he had an eye for composition. These plants were meticulously arranged and grouped together around the long, meandering pathway that circle the garden.

You could happily walk down these paths all day long…

Majorelle then employed the use of bold colours, painting the gates, pots and buildings with bright yellows, oranges and a brilliant deep shade of cobalt blue, that became known as “Majorelle blue”, which contrasted nicely with the green of the surrounding plants. 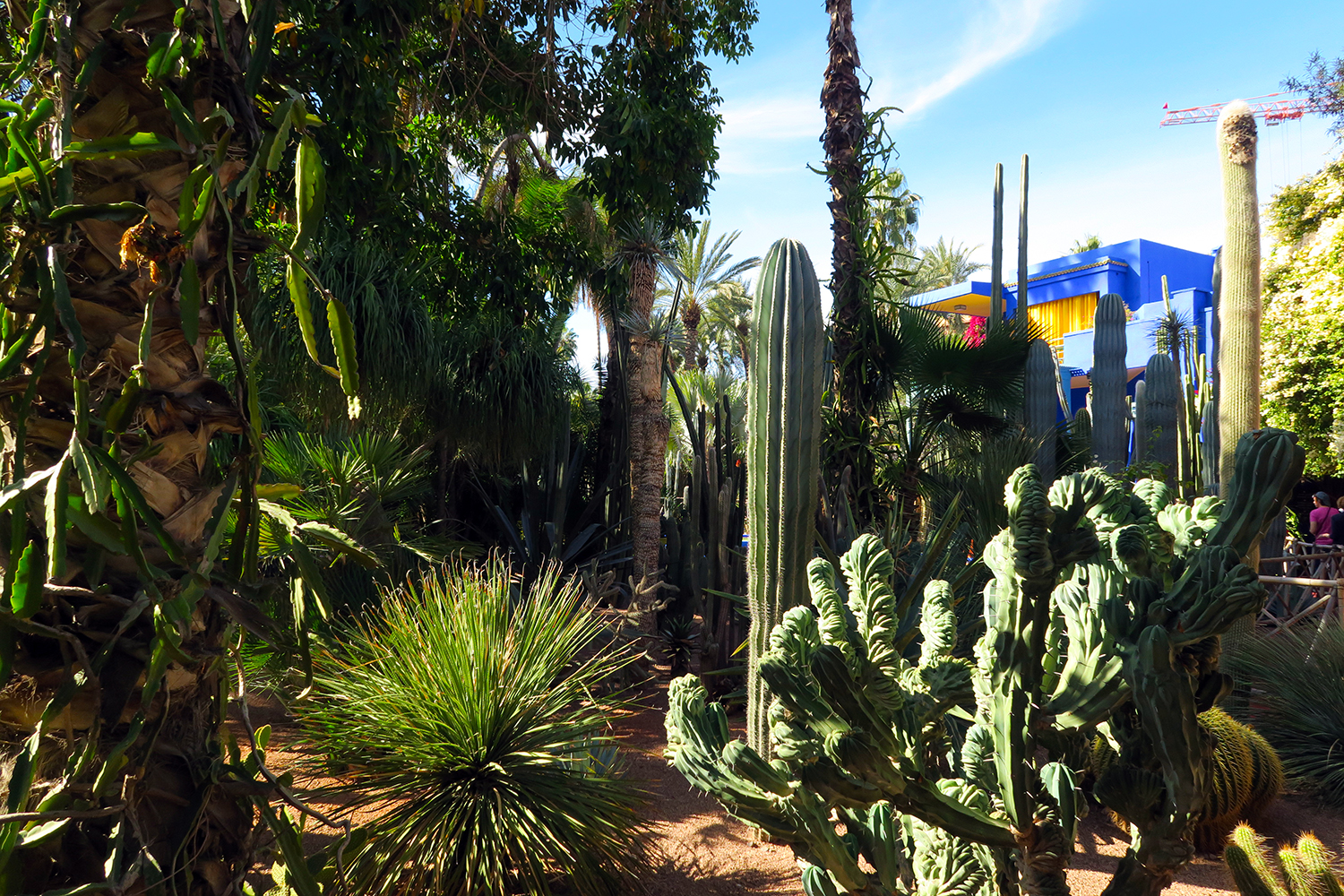 See what I mean?

The garden was enjoyed by both him and the public, until 1961, where the artist was forced to sell his portion of the garden and studio, due to a serious car accident and the subsequent medical bills. He died the following year in Paris.

The years ticked on, as the garden fell further and further into disrepair. Then in 1966, the garden had two visitors – none other than Yves Saint Laurent and Pierre Bergé.

I’d want a garden full of cacti, too.

They fell hard for the garden and upon hearing that it was piqued to become a hotel complex, snatched it up. A restoration project was started, the aim being to keep the garden as close as possible to the vision of Jacques Majorelle.

The painter’s studio was reopened to the public as a museum, which hosts the personal Berber collection of the designer and his business partner. The two took up residence in Jacques’ villa, renaming it Villa Oasis.

Yves Saint Laurent died in 2008. His ashes were scattered in the rose garden of the Villa Oasis and a memorial was erected within the garden itself. Bergé donated the gardens to the Pierre Berge-Yves Saint Laurent Foundation in Paris. They remain open to both the public of and visitors to Marrakech.

A memorial to Yves Saint Laurent can be found in the garden.

Entrance to the garden is 70 Moroccan Dirhams, with an additional 30 if you wish to enter the museum. We didn’t – the gardens were joy enough.

There is indeed, a certain sense of peace in the Jardin Majorelle. It has an air of being a place for contemplation, for inspiration. 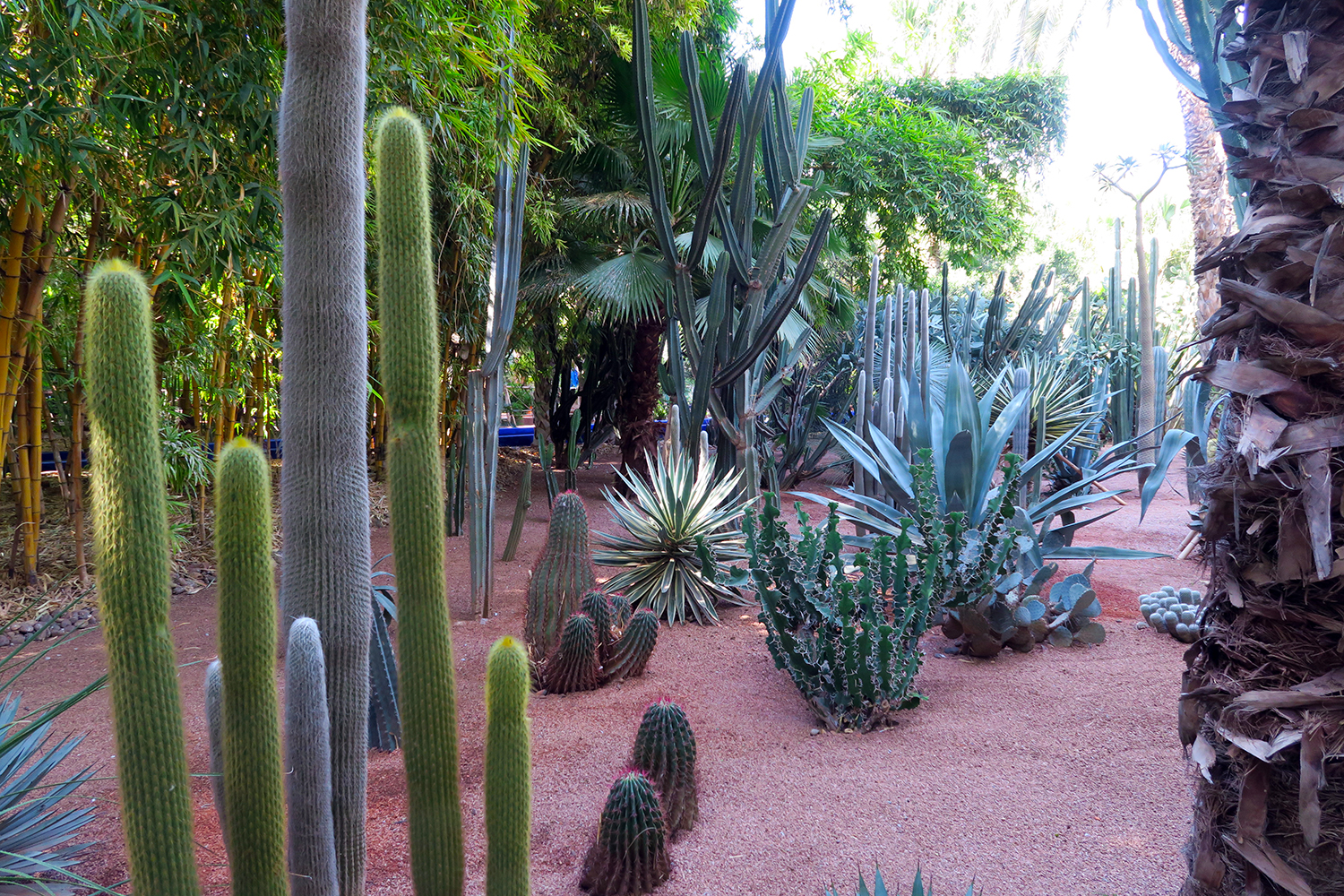 I don’t know what it is exactly that makes it so appealing. It does have a sense of being other-wordly. It’s difficult to set foot in the place and remind yourself that you remain within the city boundaries of hot, dry Marrakech.

Maybe you can’t put your finger on it. Perhaps it merely has, as the French say, a certain je ne sais quoi. It is undefinable. It just is.