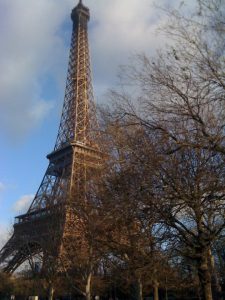 Ever since I was a little girl, I have been in love with the French language. It may have started with a fondness for the fictional exploits of Madeline & the Little Prince but it quickly burgeoned into a true love for the wonderfully mellifluous language.  I have spent years at school and then at university studying it and I continue to use it in my working life. All signs, then, would suggest that France would be the country of my dreams. Thus, when I was offered the opportunity to study French literature in La Rochelle for a semester. I jumped at the opportunity.

My thought process went something like this: I was going to Paris! I was going to live in France! Speak French to French people! Eat croissants! Eat snails! And frogs legs! (Or, at least, be entertained to find them on the menu..) I could visit Versailles!!!! See where Marie Antoinette lived! Visit Chateaus!!! Chateaus!!! Everyone wants to see chateaus!!

It was akin to the antics of a small child when she or he is given their first taste of chocolate. In short, my expectations were very high.

I trundled off the plane at Charles de Gaulle airport with stars in my eyes. Even jetlag couldn’t curb my excitement. I had one task. To make it from the Airport to the main train station via the subway. Easy, I thought.

Very wrong, I was.

You see, it hadn’t occurred to me that the Parisian subway might be made entirely of stairs. A factor that is not insignificant when you happen to be carting a suitcase that is packed with all the belongings you will need for six months. I.E. When you are carting a suitcase that is bigger than you are. A few near death experiences later, I managed to get myself and all my belongings onto the (right) train. This may have involved practically dislocating my shoulder in the process.

I remained buoyed by the fact that I was in a subway in Paris. In Paris!! So what if the compartment smelt like the worst public toilet I could possibly imagine? So what if it was approximately 40 degrees down there? I was Australian, I could handle the heat. It was all manageable. (These were, by the way, lies I was telling myself in an attempt to negate the horrible sinking feeling in my stomach. Paris may be lovely but the Parisian subway in the summer is not.)

Another Australian and I travelled down from Paris to La Rochelle together. We were sitting on the train, cautious eyes watching the luggage compartment for any sign of theft, when a man entered the compartment. For some reason, this particular train had a lot of standing room. Presumably to watch the lovely French countryside go past.

The man propped his arms against the window, angling himself towards the two of us. At first I wasn’t really paying attention but something made me look up. He winked at me. I avoided eye contact. Unfortunately, this involved me looking down, at which point I noticed that his fly was undone. I hastily looked away. Poor thing, I thought. How embarrassing.

Except, it wasn’t an embarrassing misstep for him. He had planned it.

As time went on, he adjusted himself further. Not, as any individual would hope, by zipping up his fly. To the contrary, the man was doing his best to display himself entirely. Like deer frozen in the headlights, my friend and I looked anywhere but at him. This was making everything seem a little less manageable. In retrospect, we should have moved compartments. We were the only other passengers in our compartment – precisely, I suspect, why he had chosen us for his little performance – however, we were both completely unprepared and overwhelmed so we remained in our frozen state until our stop came. Luckily for us, exposure was the man’s only intent.

At the train station, an assigned mentor, Marine, was waiting to meet us. Marine was French in all the stereotypical ways, right down to the beret perched jauntily atop her curls. She greeted us both with European air kisses and helped us to her car. So far so good. I started to feel a little better. Most French people would be lovely and I had just been unlucky on the train, I thought. No sooner had the thought crossed my mind as I was sent flying, hit by a car that had veered into the pedestrian walkway.

It hadn’t been going very fast so I wasn’t badly hurt. I was, however, bruised, dazed and a little furious. My friend rushed to my side to help me up and we both watched with growing confusion as Marine rushed to the driver and began apologising profusely to her. It soon became apparent that our mentor and the driver of the car were both in agreement over the true perpetrator of the crime: me. I’d had the audacity to get in the driver’s way. This despite the fact that cars are really not supposed to drive off their designated routes and onto pedestrian crossings.

I gaped in amazement as Marine continued to apologise. The lady was reluctant to accept the apology until it was made clear that I was not, in fact, French and therefore unaware of the proper rules of conduct. To this day, the whole incident perplexes me. Nobody I have come across since has suggested that it is normal French practice to run over unsuspecting people in car parks. At the time, however, I was desperately afraid that I had signed up for a semester in a country where people were routinely hit by cars and blamed for their own demise. (Completely irrational, I know, but that’s jetlag for you..) 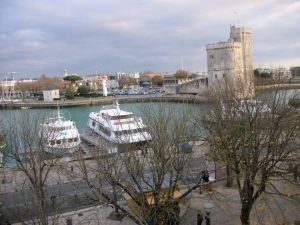 This fragile state was not helped by our arrival at the University residence that would be our home for the next six months. Despite prior arrangements and notification, the entire building was locked up. No one could be found to let us in. An hour of frantic phone calls to the University administration later, it finally emerged that the concierge had gone on an impromptu weekend away. Not a problem, one might think, were it not for the fact that she had taken the sole set of keys with her.  As you do.

My friend & I were facing a night sans accommodation.

Well, not entirely. La Rochelle does have hotels. In my bruised, weary and semi-panicked state, however, it seemed as if we were homeless. Things were not turning out as I had imagined. My first twenty-four hours in France had been decidedly lacking in croissants, cheese and general joie de vivre. France was not endearing itself to me. Even Marine’s very kind offer that we spend the night at her place did not improve my mood significantly.

The final straw came a fortnight after I’d arrived, when I woke up one morning with one eye swollen shut. I looked like I’d been in a bar fight. I hadn’t, unless I’d sleepwalked my way through one. The reality was, or so the Doctor informed me, that a spider had bitten my eyelid during the night. 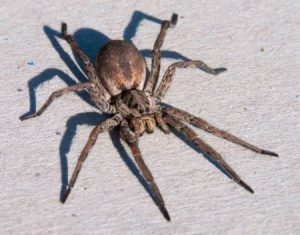 N.B. This is not the actual culprit but a variety of French spider that found its way into someone else’s tent on a French camping trip. I’m just saying, watch out for the French spiders! Source

I come from Australia, the land of the venomous creepy crawlies. Not once, in my entire twenty years of life, had I been bitten by an Australian spider whilst sleeping. Or whilst awake, for that matter. Only a French spider had had the temerity to do this. I spent the next week on some very strong anti-venom and anti-bacterial medication. For the record, hardly anyone ever gets bitten by spiders in France. My French friends couldn’t believe it. The doctor wouldn’t have believed it were it not for the fact that my eye was irrefutable proof.

It took me quite some weeks to forgive France for my less than shiny introduction to the place. My Skype calls home were frequently tearful and filled with criticism for my new temporary home. The France of croissants and chateaus seemed very remote to me. I very much wanted to come home. Like the endlessly reasonable people that they are, my parents told me to give it more time, to focus on the croissants and my studies and the opportunities to meet new and interesting people.

Lo and behold, they were right. A few weeks further in, I was having a ball. France really is a wonderful, beautiful country. Living there was a privilege, studying there even more so. My weekends were taken up by travel to a plethora of incredible and fascinating countries and I met people from all over the world. (Lest anyone question whether exchange students actually work, it should be noted that I also became conversant in French and very familiar with a host of French literary greats.)

It was just really, really hard to see that through the prism of the first twenty-four hours of ridiculously unfortunate events and the subsequent, unfortunate spider bite. My parents were right though, it did get better. The France I had dreamt of was still there, waiting to be discovered. I just needed to give it a chance.  The experience taught me a pretty crucial life lesson: Always assume that your first impressions won’t be your lasting impressions. 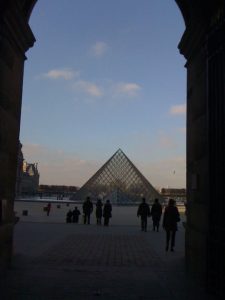 Moving to London: Everything You Need to Know

Moving to a New City Alone: 11 Tips on How to Cope

is a twenty something adventurer with a penchant for travel, for books, for cross country running and the culinary arts. Not to mention the occasional glass of wine ;)

All travel has untold stories of woe to balance the good!

Exactly! When it’s happening, I like to tell myself that, one day, it will be a funny story!

That’s the only thought that helps you through the tears and frightening feelings.