Dinner With a View: Duck and Waffle in London

What do you do when you clock off work at an impossibly late hour of the night?

You take yourself and two workmates out for a decadent dinner, of course. Where else other than Duck and Waffle in London? 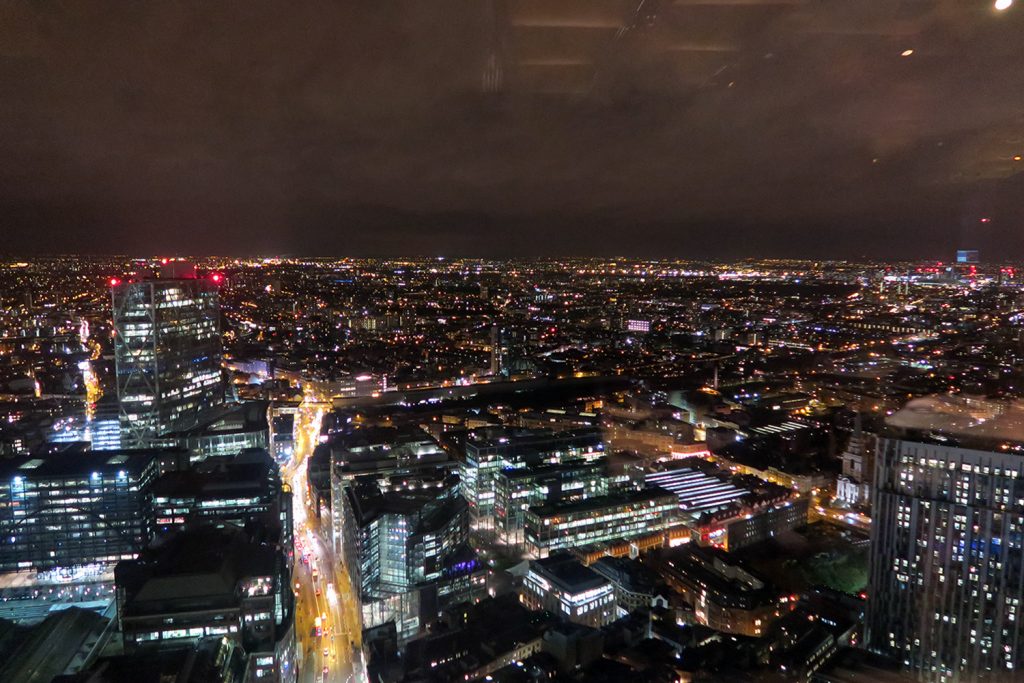 Duck and Waffle is touted as being the highest restaurant in the UK, located on the 40th floor of 110 Bishopgate. The British public have let us down by not nicknaming this skyscraper, so we’ll have to refer to it by its correct name – Heron Tower.

The restaurant is open 24 hours, 7 days a week. It’s pretty damn nuts when you think about it and my heart goes out somewhat to the staff. It’s the kind of restaurant where you have to book in advance – which suited me perfectly fine. I hate waiting in lines, particularly when I’m ravenous.

We arrived at the restaurant five minutes early for our 11pm booking. Riding the glass elevator to the 40th floor is an adventure in itself, particularly if flights make you uncomfortable. I tried to be a brave girl and keep my eyes open for the journey, but it was difficult.

After you wait for everyone else in the lift to get off at Sushi Samba, you will arrive at your destination. Pop your ears and head on past the bar, through to the restaurant.

If you’re in a larger group or a pair, you’ll have a pretty good chance of being seated by a window. All the other plebs get to sit in the centre of the room.

Choosing a dish from the menu was… difficult. There were so many odd sounding dishes that I was itching to try. Like, the spicy ox cheek doughnut. Or the foie gras crème brûlée, which could be either really really good, or just plain awful.

After much discussion, we decided to order two plates of the eponymous duck and waffle, some bbq’d pigs ears and the roasted jerusalem artichokes. I campaigned for the last plate, as it’s become my new favourite vegetable. 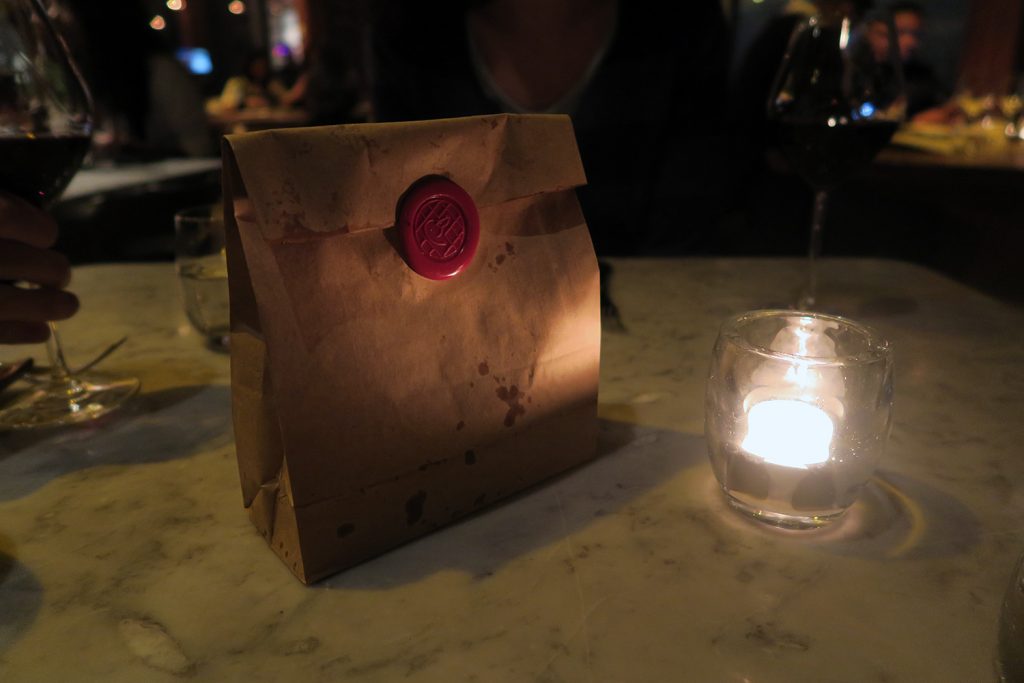 The pig’s ears were the first to arrive, in a mysterious grease stained package.

I was kinda hoping there’d be whole ears encased in the bag – alas they were served in stripes. However, they were utterly delicious. 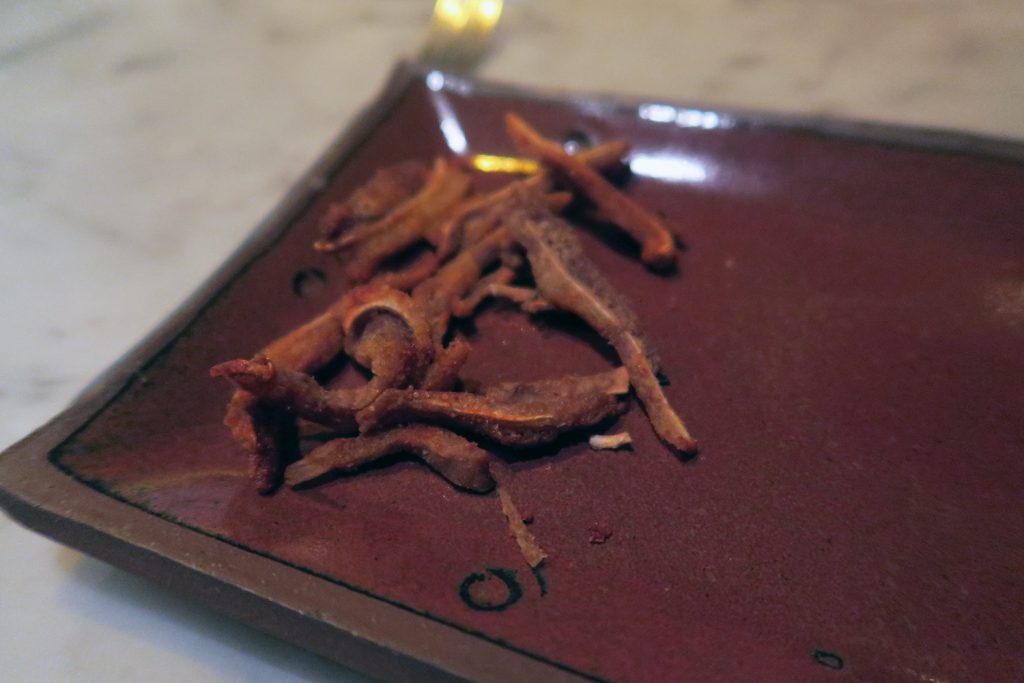 We inhaled the artichokes, as I had suspected we might. Then, out came the meal we’d been dying to try. I quickly took a blurry photograph that I’m now not at all happy with and we hoe’d on into the dishes. 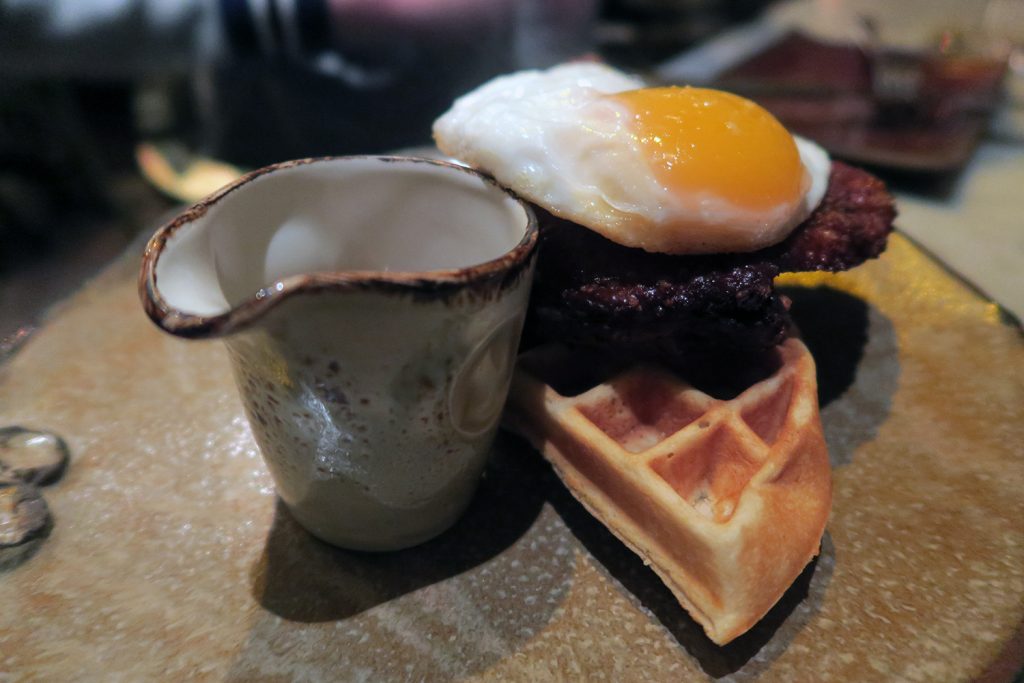 I’m not sure if I would have been able to finish a plate of it myself, but splitting two between three was an excellent idea (it seems we’d been full of them that night). Whoever came up with this medley of taste sensations is a flipping genius. Duck is the reason I consistently fail to embrace vegetarianism. 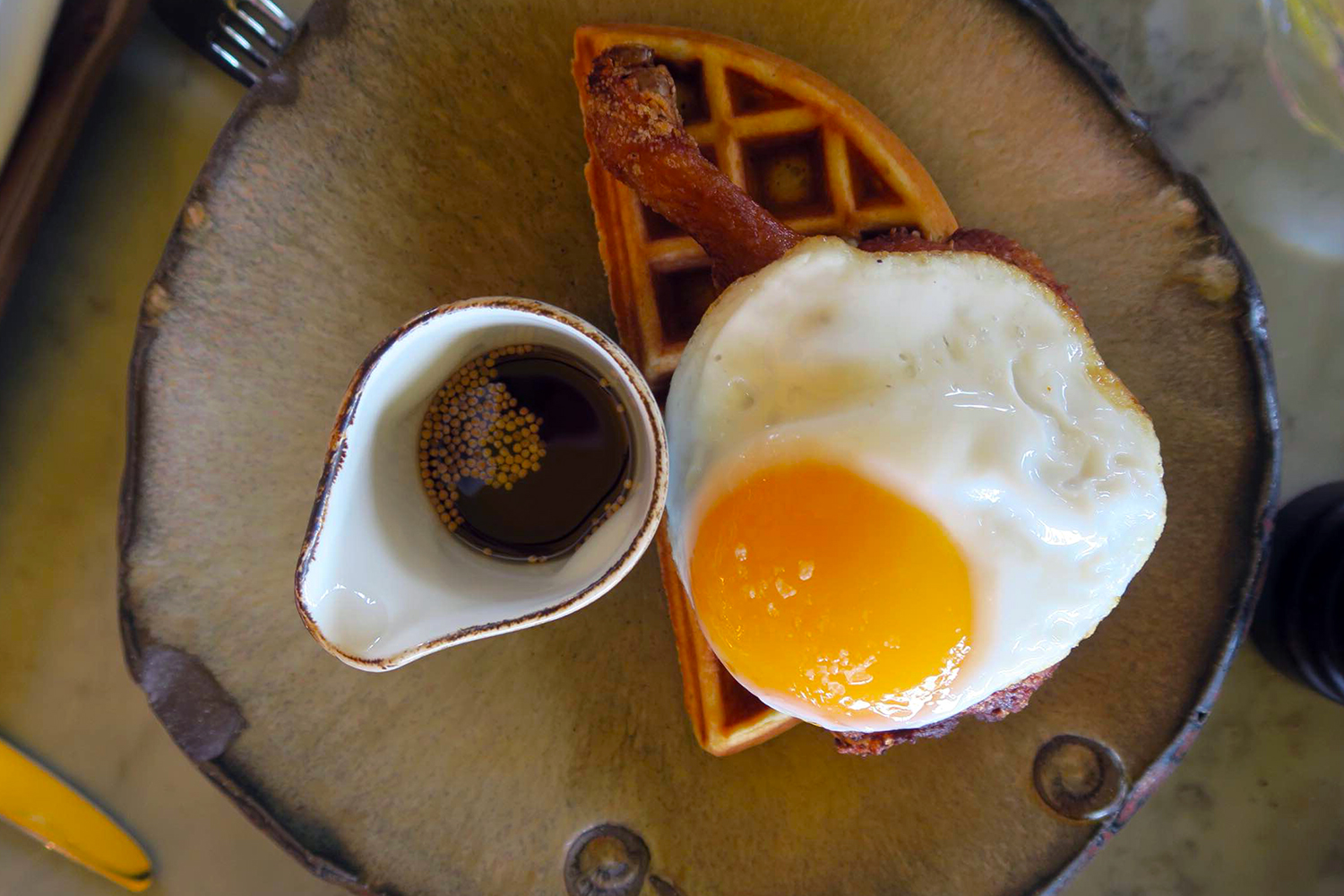 By this time it was around midnight and the restaurant, which had seemed rather quiet when we arrived, was beginning to fill up. It was a random Wednesday evening in the middle of the city of London. A city where people wake up at 530am to attend an early morning rave and venture out of their warm houses in the middle of the night to pig out on expensive junk food. My crush on this city is growing and growing.

Thanks to skipping lunch, I had just enough room for a tiny bit more. Fortunately, there was a brownie sundae featured on the dessert menu, which was the perfect size to split between two. 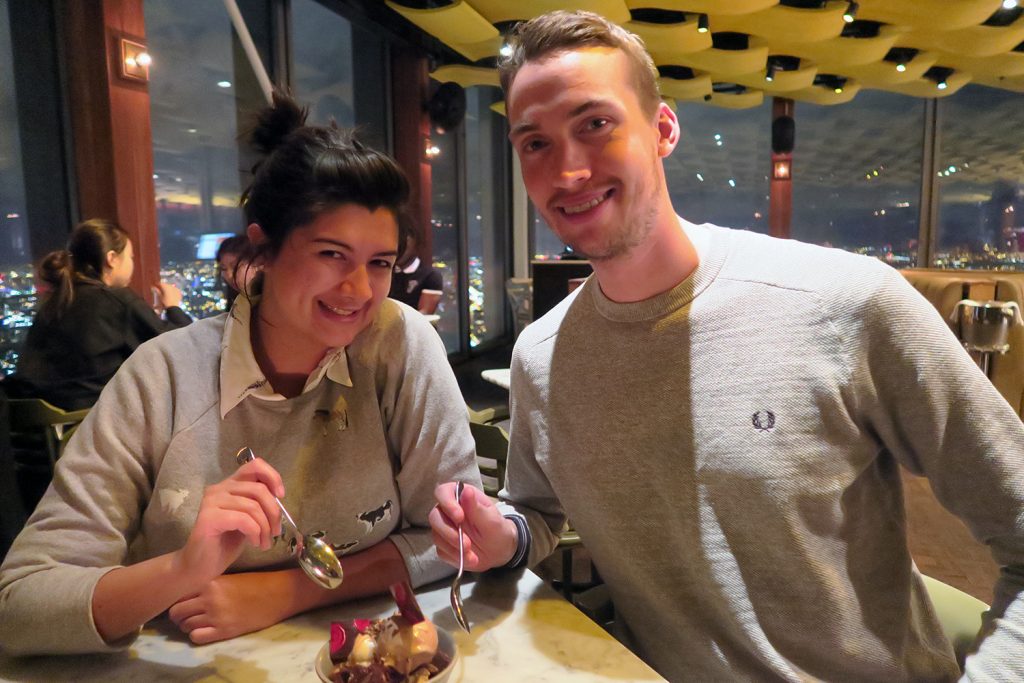 Although I suspect I’ll now need to do a week’s worth of exercise to burn off the meal, there’s no complaints from this girl. The perfect end to a very long day at work. 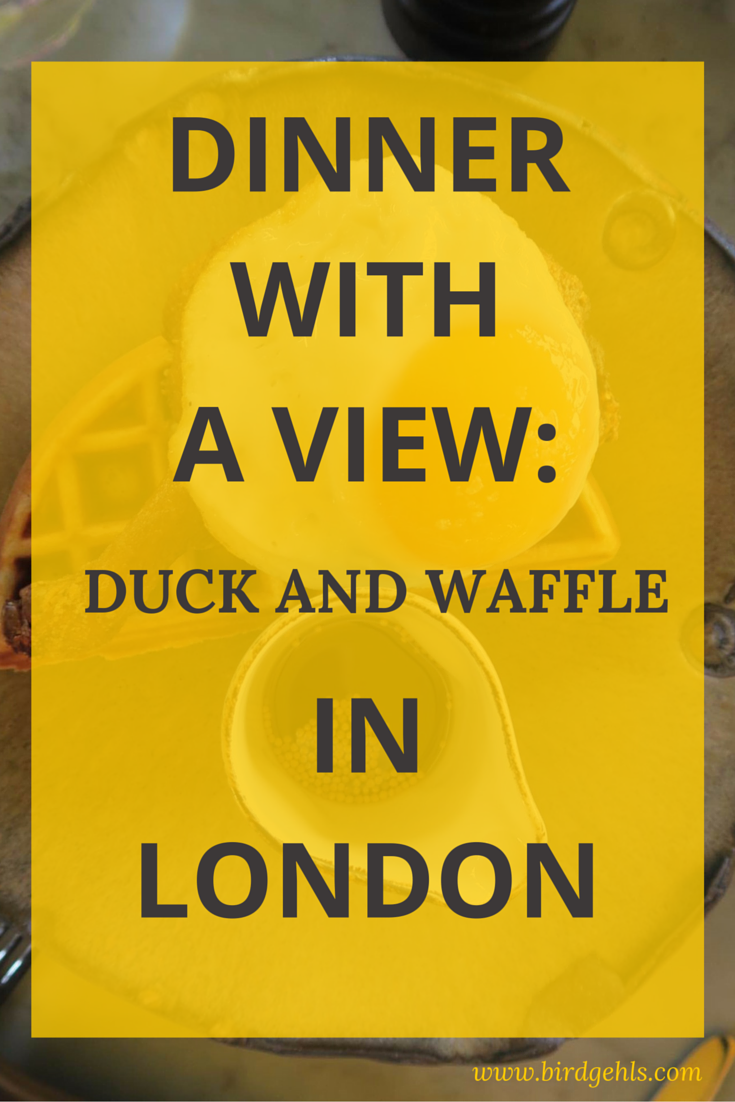