Benalla Street Art: A Guide to This Colourful Victorian Town

If you’re a fan of urban art, make sure you dedicate some time to checking out the Benalla street art. This town, located three hours from Melbourne in Victoria, has over 60 murals painted on the walls of its buildings! There’s a yearly festival held, where artists flock to the town for a weekend of painting. Find out more about visiting Benalla and seeing its colourful art in this post. 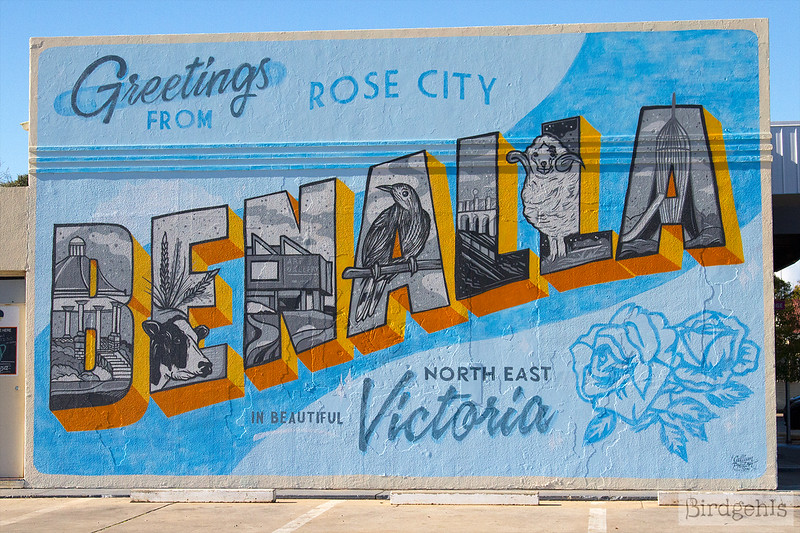 Melbourne gets a lot of attention for being quite a colourful city, but there are plenty of other places in Victoria that urban art lovers will get a kick out of visiting.

One such town is Benalla, about three hours north of Melbourne. In a bid to revitalise the town and bring in tourism, over 60 murals have been painted on local public buildings, in alleyways, shops, at the skate park, on library walls – even the public toilets are covered in bright, urban art.

This has had the effect townspeople had hoped for, putting Benalla firmly on the map as a must-see destination in the state, for lovers of urban art. Another work by Dvate in Benalla.

You can head north to view the Benalla street art anytime you fancy, or you can do what I did and specifically attend the annual Wall to Wall Festival. During this one weekend in early April each year, artists from around the globe paint their works on every available surface.

In this post, I’m going to give you a few examples of Benalla street art, so you know what to look for. We’ll look at options of where to stay and eat in the town, as well as what’s nearby, if you fancy branching out and exploring a bit more of Victoria.

Read more: Where to Stay in Melbourne: The Best Neighbourhoods to Explore 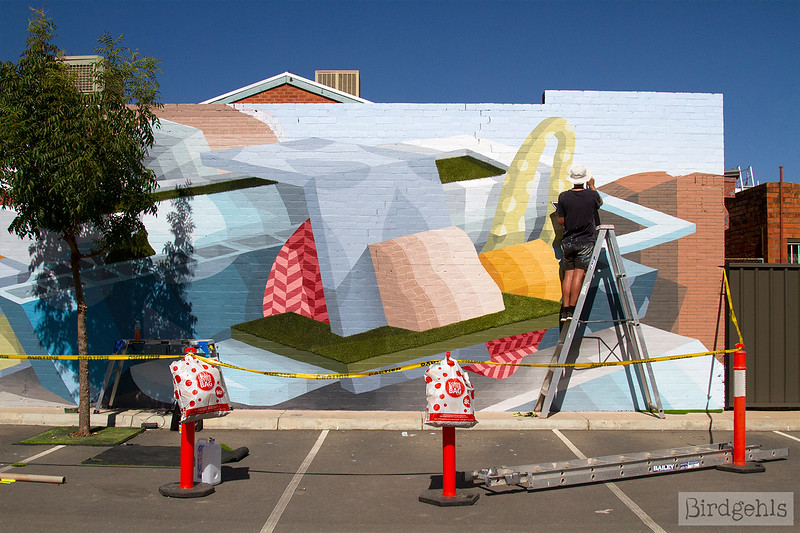 I won’t take you on a tour of all of the Benalla street art – we’d be here all week! Plus, half the fun is exploring the town for yourself and seeing what you uncover along the way.

Rather, here are a few select murals. From time to time, these murals get painted over, so I’ll try to keep this post as updated as possible. I’ve too got plans to return to Benalla to photograph more murals, as the morning light in many of these shots was not working in my favour. 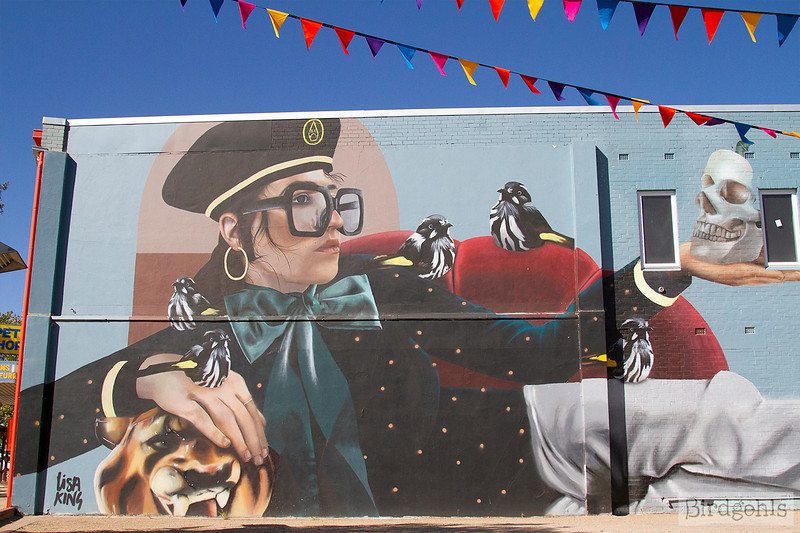 This can be found on the side of (the no longer open) Georgina’s Restaurant, 100 Bridge Street East.

This work of Skinny’s is a particularly effective use of setting and space.

Found at the rear of Stolz Sleepzone, 56 Carrier Street. Skinny has another mural of “Timothy Leary” on Clarendon Street.

Also, so pleased that Raphael is on this mural as he’s clearly the best Teenage Mutant Ninja Turtle.

This beautiful mural can be found at Bertalli’s Bakery on Carrier Street. A work by Anton Pulvirenti is nearby. Photo to come soon, as my current snap of it is pants.

Dvate has several murals around town and some silo art nearby.

Dvate has three works in Benalla and has too painted a nearby silo in Goorambat. His works often feature threatened Australian fauna, such as the critically endangered Regent Honeyeater, pictured above.

You’ll find this work at the back of Target. His two other murals in town are located at the back of SEC (a working dog) and at Harrison Dobson & Cottrell Solicitors (a possum, located on 2 Bridge Street East).

Dvate is one of my favourite street artists, with works all over Melbourne, too. They’re mostly of birds, hence the adoration.

Adnate currently has two works in Benalla itself, this one on the back of Marsha Watson and at the North East Artisans Gallery (pictured below and located at 122 Bridge Street East). I highly recommend visiting the Gallery too, whilst you’re in Benalla.

Adnate painted a third mural for Wall to Wall, located in the Uniting Church at Goorambat.

The NEA Gallery works are ever-changing.

Close up of Claire Foxton’s work.

These walls are located outside the NEA Gallery and get painted over a fair bit.

Unfortunately, Insane51 hadn’t finished his mural (of the woman swimming) whilst we were there. He does pretty, ah insane 3D works, so I’m looking forward to going back and checking out the finished product!

Sirium has painted bushranger Ned Kelly, who lived and… ranged(?!) around the area.

Found in Rambling Rose Carpark. The carpark is located on the street behind 78-80 Bridge Street East. Sirium’s second work is of a snake on Fruits ‘N’ Fare, Bridge Street.

A beautiful work by George Rose. 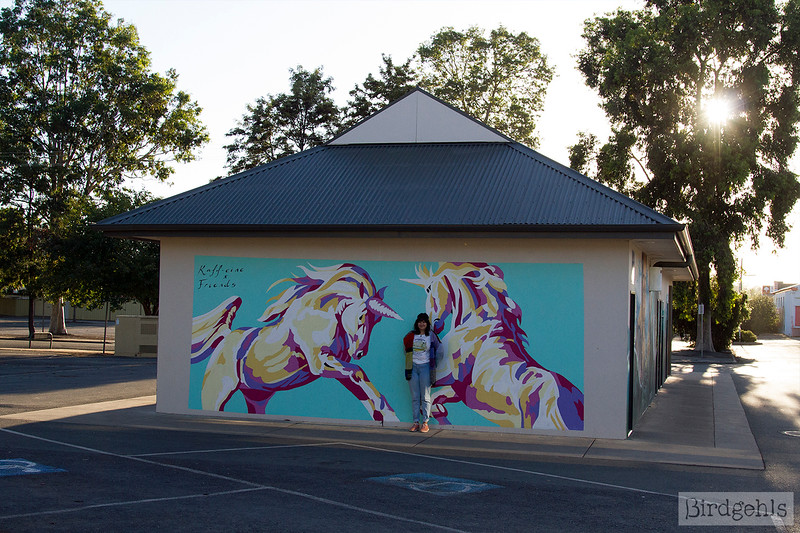 Kaff-eine has four murals in town, all of horses.

This particular work appears on the Denny Street Community Wall (which also features a work by Leonard Siaw).

Kaff-eine has a total of four artworks around town and they’re all of horsies. You can find them on Hannah Street, at Paint By Numbers (pictured below) and at the Benalla Library. Seeing the Benalla Street Art for Yourself

When visiting Benalla, you can either do a self-guided tour of the town (see map here), or hop on an organised tour.

These tours operate Tues, Weds, Thurs, Sat and Sun and last 90 minutes. You can book a place on the tour here.

The organised tour provides an opportunity to hear about the artists and stories behind the works, which you don’t get out of a self-guided stroll around town. The Benalla Street art website isn’t currently up-to-date either, missing the works that have sprung up over the last year.

If you're in the High Country of Victoria Australia, make sure you check out #Benalla, which has over 65 painted murals painted across the town. #VisitVictoria Click To Tweet 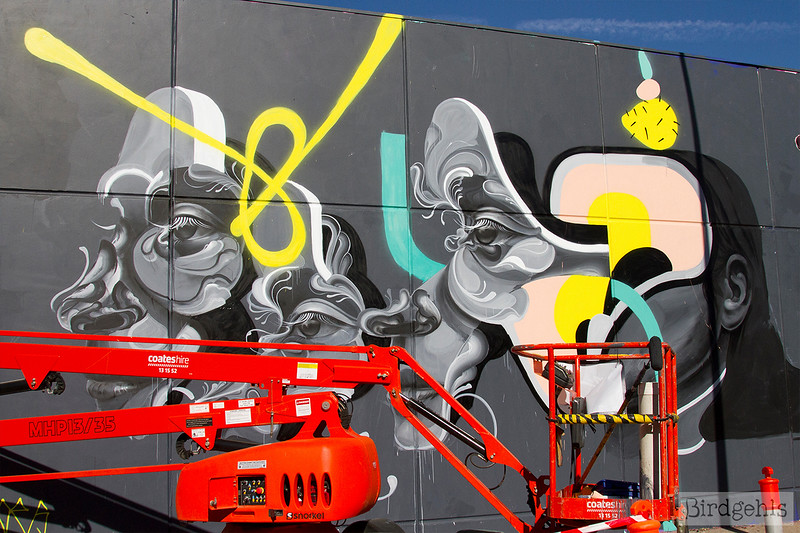 There are quite a few nice cafés and restaurants in Benalla, but here’s where we ate whilst in town for Wall to Wall.

We had both lunch and brekky at The Rustik – it was just like having brunch in Melbourne. I suppose this can be a good or bad thing, depending on which way you look at it.

I was pleased but the lady ordering food in front of me was most disgruntled when she got to the front of the queue, stating that she couldn’t understand anything on the menu and she just wanted some plain old toast and eggs, thank you very much!

I agree, these sort of menus are difficult to decipher if you’re not fluent in hipster, like myself and most Melburnians.

For dinner, check out the The North Eastern Hotel, or just “The Northo” in Australian.

Expect really delicious pub fare, with a family friendly atmosphere. The oysters in particular were amazing.

I love country pubs quite a lot and The Northo didn’t disappoint.

Other things to do in Benalla and beyond 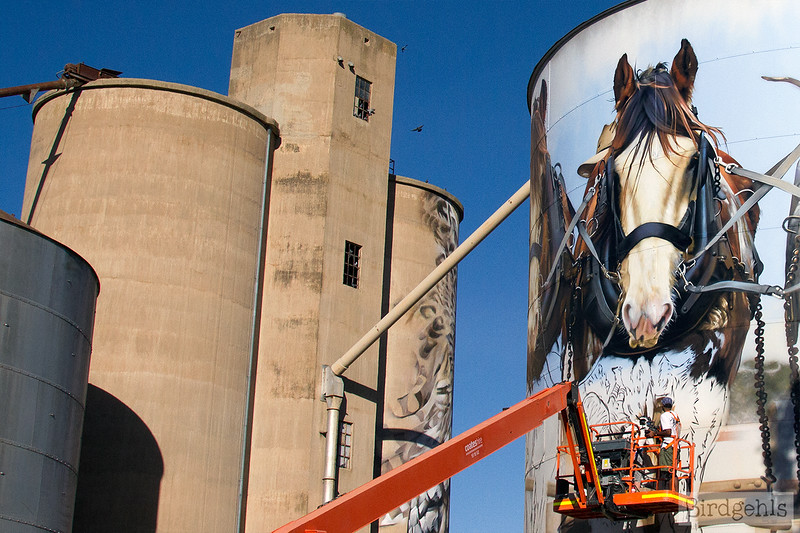 Benalla is the starting point for the second silo art trail in Victoria, consisting of five giant murals stretching around an hour north of the town.

Keep your eyes peeled for the following:

Make sure you check out Goorambat Uniting Church for Adnate’s beautiful mural of “Sophia”, the female element of Holy Spirit.

Viewing these silos should only take a couple of hours, longer if you want to take a stack of photos and check out the tiny towns where they’re located (which I highly recommend doing).

I’d also try to see them earlier on in the morning or during the day, as the light gets behind most of them come evening, making for more challenging photo-taking conditions.

Pose with Ned in Glenrowan

Benalla is part of the “Ned Kelly Touring Route”. Those interested can travel through towns such as Euroa, Glenrowan, Beechworth, Greta and to sights such as Power’s Lookout and Stringybark Creek. All have ties to one of Australia’s most notorious bushrangers.

Glenrowan in particular is the place to head to if you’re a Kelly gang enthusiast – it’s the setting of Ned’s last stand. The entire town pays homage to the famous bushranger, with a museum to explore, Ned’s homestead and some really cool art dedicated to the bushranger found around the town.

Best of all, there’s a six-metre tall statue of Ned in shootout mode, wearing his metal armour. If you collect photos of Australia’s “Big Things” statues, then this area is a must-visit. Gracebrooks – One of the many cute wineries around the King Valley.

Eat your way around the King Valley

Benalla is not at all far from the gourmet region of Milawa and the King Valley. It’s an area of Victoria that I find myself returning to again and again and again – it’s just that good.

The King Valley is home to “Prosecco Road”, named such as many of the vineyards in this area have Italian origins and make some quality prosecco. If you’re a fan of this Italian sparkling wine, then the King Valley may seem like heaven to you.

Regardless, here are some of my favourite vineyards in the area.

Read more: Things to do in Hobart, Tasmania

The Mountain View Pub in Whitfield is a good place to stop for lunch or dinner. Brown Brothers is home to Patricia’s Table, a hatted restaurant in Milawa and the fare there is delicious.

I highly recommend visiting the Milawa Cheese Factory (try the samples before you buy!) and picking up a jar of hot mustard from Milawa Mustards. Your tastebuds will thank you.

Read more: Things to Do in the King Valley

Two murals for the price of one by Tom Gerrard and Loretta Lizzio.

Where to Stay in Benalla

We spent the night at the local Comfort Inn in Benalla. It’s priced at around $140 for a double room.

Check out other accommodation options in Benalla

A colourful mural in Benalla by Phibs & George Rose.

Other posts about Victoria

What do you think of the Benalla street art? Have you seen it for yourself? Would you attend the Wall to Wall Festival? 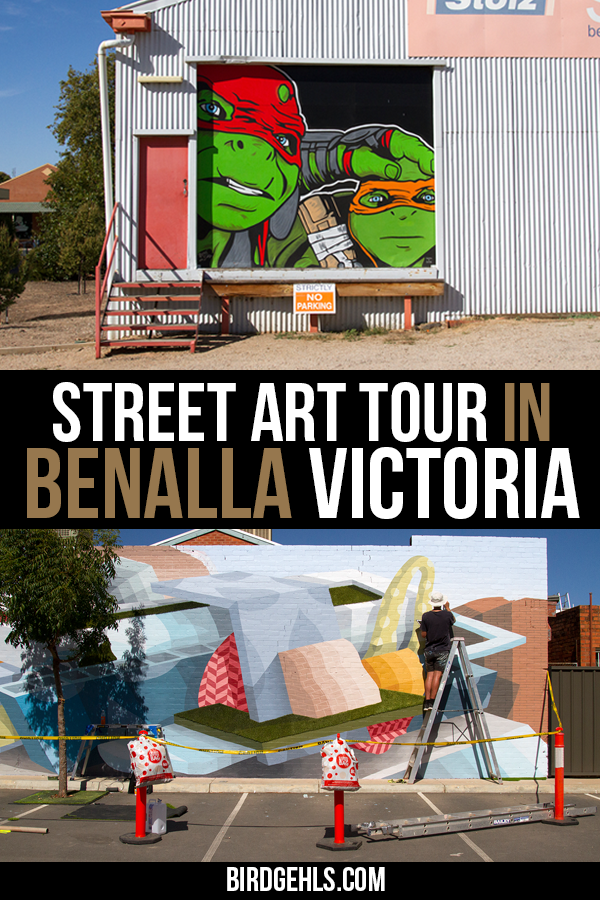